The Research Committee of the Department of Surgery supports clinical and translational research in order to teach residents research techniques that will help them throughout their careers. Intended to 'train the investigators of tomorrow,' this research program includes Startup Grant awards and progress reviews, a Surgical Investigators Research Competition in May, and Blakemore Prizes and Awards at the annual end-of-year dinner.

About the Startup Grants

Grants generally range between $2,000-$7,000 and are awarded in October each year. In addition, two $2,500 supplements supported by Dr. Michael Treat are awarded to develop surgical research in bioengineering. The General Surgery Resident submitting the best Startup Grant becomes the John Jones Fellow, serves as a member of the Research Committee, and presents research results at John Jones Day each May.

In addition, the annual $10,000 Kenneth Forde Award is granted to an outstanding junior faculty member initiating a career in academic surgery.

Grants of approximately $7,000 are intended for feasibility studies leading to external funding. Applications are solicited from two-person teams composed of a fellow, student, or resident and a Surgery attending. Each member of the team is allowed to submit only one grant application. An approved IRB number for human research or IACUC for animals is recommended by October 1.

Blakemore Prizes of $1000 for the best body of research during the general surgery training program were awarded in June, 2015 to Irene Epelboym (Michael Kluger sponsor) for clinical research in surgical oncology and to Abbey Fingeret (Roman Nowygrod sponsor) for research in Surgical Education. 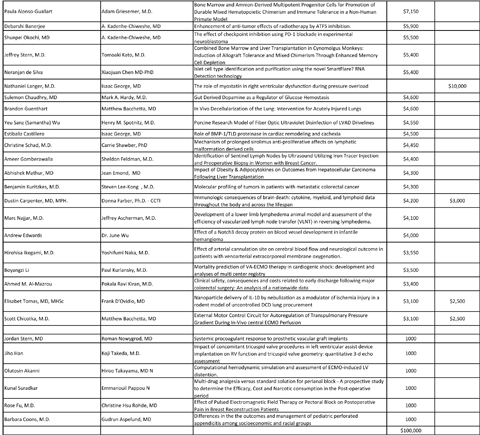