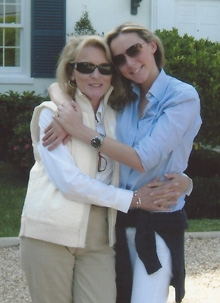 Columbia University has been close to my family for many years. My late stepfather, Roone Arledge, graduated from Columbia College in 1952, and remained an active alumnus throughout his life. He received the prestigious John Jay Award and Alexander Hamilton Medal; served as a University Trustee from 1999-2002; and has been noted as one of Columbia's "250 Columbians ahead of their time." In 2000, he left his own legacy with the dedication of The Roone Arledge Auditorium and Cinema, located in Alfred Lerner Hall. It was an appropriate legacy to commemorate his lifetime achievements in TV sports and news journalism. His beloved wife and my mother, Gigi Shaw Arledge, passed away in 2010 from pancreatic cancer. I now leave her legacy here at Columbia at The Pancreas Center.

In January 2009, my mother was diagnosed with pancreatic cancer. By August 2010, she had passed away. She was only 58 when she died and had lived her life as a healthy woman. She was a wonderful mother, a devoted wife, a generous philanthropist, and a kind woman. Her family and friends suffered a great loss when she died, but her legacy will live on through Columbia by helping others who suffer with this disease.

Pancreatic cancer is a curious disease. It strikes quickly and mercilessly. I watched my mother's health deteriorate over the course of a year. Her rapid loss of weight and her inability to eat towards the end of her life was heart breaking. Most challenging for me was that my mother chose to keep her diagnosis a secret. It was not until the day she died that her doctor revealed to me what she was suffering from. It was the first time I learned about pancreatic cancer. I realized that given her bleak prognosis and the lack of effective treatment options, my mom must have been very afraid. Always one to protect me and not want me to worry, she stayed silent. She went through radiation, surgery and chemotherapy alone, with no guarantee of recovery, due only to the fact that pancreatic cancer is still young in its research.

I do not want pancreatic cancer to be a cause for shame for others like it was for my mother. In addition to the devastating physical consequences of pancreatic cancer, my fear is that there is a counter-productive psychological component that often prevents people from coping with it. Shame over the physical effects of the disease and a scary nonnegotiable prognosis are two attributes that often result in an unwarranted withdrawal from others. It is my hope that with more monetary support and increased awareness these attributes will be removed from pancreatic cancer. Nobody should be ashamed to have cancer. It will take time, and research, and publicity, and new government legislation. Reforms such as the Pancreatic Cancer Research and Education Act have the potential to move this field in the right direction.

Currently, research points to the fact that we are still in the infancy stages of understanding this disease. There is so much to learn and so much currently unknown about this type of cancer. Unlike other types of cancer, such as prostate and breast cancer, pancreatic cancer does not get the press or publicity it deserves. For a disease where patients only have a 20% survival rate in the first year and a 4% survival rate after five years, pancreatic cancer deserves more attention. Even in our society, only a handful of public figures have brought it to light, including Patrick Swayze, Aretha Franklin and Steve Jobs.

Now is the time to move pancreatic cancer research forward. Dr. Chabot, Dr. Wang and the team at The Pancreas Center are leaders in this battle. With their focus on research, treatment and prevention, they are helping develop society's knowledge of pancreatic cancer. In my mother's honor, I have donated a research and endowment fund that will support the Center's scientific research.

This October will mark the first annual Gigi Shaw Arledge Conference on Pancreatic Disease. It will be an opportunity for doctors and scientists from around the world to meet and share their research and knowledge, discuss breakthroughs and progress, and create a network of contacts. I am proud to be part of making this conference possible. See you in October!!