Adam’s eyes were darting around the room observantly, periodically stopping as if something in particular had piqued his interest. It had been only a minute since I first met him, and I could already tell his mind worked quickly – especially for an 11-year old. Approximately two weeks earlier, I had received a bundle of letters and drawings in the mail from Adam. The encapsulating letter read:

“To the pancreatic cancer team at Columbia Presbyterian

My name is Adam Abramowitz. I am a 5th grader at Seely Place Elementary School in Edgemont, NY. Over the past few years I have had many fundraisers to raise money to donate to pancreatic cancer research at your hospital. I hope to stop this disease. Today I am sending you letters that were written by my religious school class and me. These were made to share with your patients to brighten their day.”

The 13 cards included drawings of flowers, messages of hope and love, and jokes to brighten the patients’ days. Normally, it is rare for someone in 5th grade to step outside him/herself and empathize with those in need. But, as I quickly learned, Adam is not your normal kid. 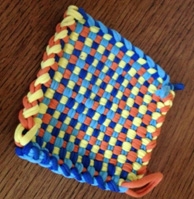 His saga starts at the age of 6; an age most of us were more concerned with fun than fundraising. His cousins had recently showed him how to weave potholders like the one shown on the right. Adam’s grandfather, Dr. Stephen Schreibman, works in the field of pancreatic cancer and would often tell Adam how dangerous the disease was and how little was understood about pancreatic cancer compared to the other major cancers. Adam saw this hobby as an opportunity to make some money and donate it to pancreatic cancer research. After weaving several potholders, he sold them door-to-door around his neighborhood, often times hitting the same houses multiple times. Ever the forward thinker, Adam started to consider what was popular with kids his age. This led him to start selling bracelets, using the weaving techniques he used for the potholders. But how would he maximize his potential as a salesman, how could he reach as many people as possible? Knowing how many people worked in New York City, he stood outside of his local MTA train station, selling bracelets to people coming back from New York. As Adam got older, this creativity and resourcefulness grew along with him. In one instance, Adam set up a carnival-like game to attract potential donors. He stacked cups in a pyramid, asking the patron to pay a nominal fee to try to knock them all down for a chance to win some prizes. Instead of directly selling products he made, he was enticing people to donate by drawing them into a game. Adam then expanded his reach by applying his entrepreneurial nature to the internet. With the help of his father, fourth-grade Adam built his own website, www.endpc.net, selling the very potholders and bracelets that began it all! The products are $5 and all proceeds go to helping the battle against pancreatic cancer.

A note from the author:

With fundraising, it is easy to lose sight of the person that drives the effort. Often times, we are so focused on the problem at hand and how to fix it, that we forget to recognize the man or woman (in this case, child) behind the scenes. With a grandfather who worked in the field of pancreatic cancer, Adam understood how deadly the disease was and how severely it affected patients. In meeting Adam, I had the opportunity to learn what fascinates him, both inside and outside of the school setting. He plays three sports, although is most partial to tennis. He is an avid science lover – which was obvious when talking to him. We talked about his interest in biology, as well as his interest in inventions. He recently submitted an invention to the 3M Young Scientist Challenge, something he would have done last year, if only they let 4thgraders enter the contest. He is someone who loves to ask questions, an attribute that is indispensable for an aspiring scientist. One of the questions concerned the similarity in structure between outer space and the brain on the cellular level – and yes, Adam is 11 years old. Adam Abramowitz is curious, intelligent, funny, but most of all, compassionate. Please visit his website www.endpc.net to help his cause and help those afflicted with pancreatic cancer.

“It is under the greatest adversity that there exists the greatest potential for doing good, both for oneself and others.”