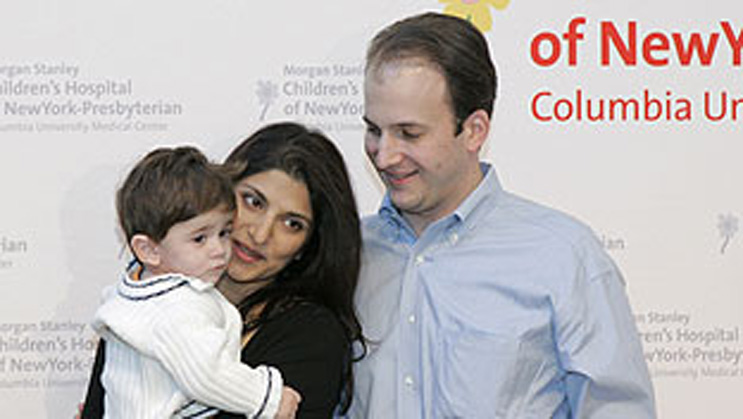 Brooklyn newborn Jordan Trimarchi received a second chance at life, when an anonymous gift of a replacement heart was transplanted into his tiny body by Dr. Jan M. Quaegebeur. Exactly a year later, on January 26, 2006, Jordan was back at NewYork-Presbyterian/Columbia University Medical Center. But this time he and his parents came to celebrate the child's excellent health and normal development with his doctors.

Jordan was born on January 18, 2005 with a tumor the size of a golf ball in his heart. His parents brought him to Morgan Stanley Children's Hospital of NewYork-Presbyterian/Columbia University Medical Center, where Dr. Quaegebeur, who is Professor of Surgery and Director, Pediatric Cardiac Surgery in Columbia's Department of Surgery, operated on January 21st to remove the tumor. It quickly became apparent that Jordan's heart was too damaged to work on its own. He needed a heart transplant.

Jordan was placed on a special heart-lung machine for infants, known as ECMO, to help support his heart while a suitable donor was sought. More than 100 doctors labored to keep him alive, monitoring his every breath. Because of Jordan's tiny heart and fragile immune system, his doctors anticipated that he only had about a week to live. After a week on ECMO, his other organs would begin to fail. Jordan's parents made a plea to the public regarding their baby son, in hope of finding a donor heart. On January 26, 2005, five days after his initial tumor operation, the Trimarchis' impassioned quest for a replacement heart was fulfilled, and Dr. Quaegebeur performed the delicate transplant that very day.

Jordan's care since the operation has revolved around preventing his body from rejecting the transplanted heart. "It's all gone very smoothly," says Dr. Jacqueline Lamour, Assistant Professor of Clinical Pediatrics in Columbia's Department of Pediatrics, who is one of the cardiologists in charge of his care. At regular intervals since his discharge from the hospital last February, Jordan has been evaluated for signs of rejection and infection. In addition, he is evaluated to insure his growth and development are appropriate for his age. One of the tests for rejection involves threading a cardiac catheter through his femoral vein and removing a tiny piece of the heart muscle for biopsy. He has already had several of these procedures.

For the rest of his life, Jordan must take immune suppressing drugs which, though they ensure his body does not reject the new heart, also reduce his ability to fight infection. Even when he catches a cold, his parents are in close contact with the transplant team to insure his body is able to fight the infection. "The signs and symptoms of rejection can mimic those of infection," says Dr. Lamour. The boy's healthcare team is working to reduce the amount of immune suppresant medication he takes. Having an underdeveloped immune system at the time of his transplant has proven to be a benefit for Jordan because he can take a lower level of immunosuppressant drugs. "With adults it can be more difficult because their immune systems are better developed," Dr. Lamour says.