In a bold and unprecedented initiative, the Gastric Cancer Care Program of NewYork-Presbyterian/Columbia University Medical Center is working to transform the face of a disease that has not received a great deal of public attention in this country. The center aims for nothing short of resetting the standards for treating gastric (stomach) cancer: to achieve early detection of gastric cancer in the U.S. and to cure gastric cancer worldwide.*

Frequently related to H. pylori infection, stomach cancer is much less common in the U.S. than in countries such as Japan, Korea, Chile, Brazil, Iceland, and other countries with strong traditions of salted, pickled, and smoked foods. Though it may be less common here, it is far more deadly. In Asia and South America, physicians have much greater experience in diagnosing and treating stomach cancer than they do here in the U.S. With that familiarity, they are far better able to detect it at earlier stages when it is curable. For instance, in Japan and Korea, a surgeon will treat 300-600 patients per year with gastric cancer whereas in the U.S., a center is considered "high volume" if it performs ten gastric cancer surgeries per year. 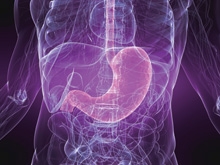 The only cure for gastric cancer is to surgically remove the stomach. That option is available if the cancer is found in early stages or in more advanced stages but confined to a localized area. In the U.S., more than 60% of cases are diagnosed when it is too late for surgery. Despite the use of chemotherapy and radiation, the five-year survival rate is less than 50% in the U.S., with about half of patients dying within the year they were diagnosed.

Of the approximately 21,000 people diagnosed with gastric cancer every year in our nation, most could be spared the risk of death through early detection. In Japan, Korea, Singapore, and Taiwan, screening programs are in place just like mammography is routine in the U.S. But here, where the incidence of gastric cancer is relatively low, widespread screening is economically unfeasible.

To find a way around the financial impediment to screening every adult, physicians and researchers at NYP/Columbia are zeroing in on those at highest risk. Studies show that certain patients are at higher risk for developing gastric cancer than others, and the center is using that data to find ways to target surveillance endoscopy to those who most need to be screened. Asian Americans are at highest risk, followed by black, Hispanic, and Caucasian Americans. In addition to ethnicity, the most important risk factors are infection with H. pylori and chronic swelling and inflammation of the stomach (atrophic gastritis). Other risk factors include a family history of stomach cancer, presence of a polyp larger than two centimeters, pernicious anemia, smoking, family cancer syndromes such as HNPCC, male gender, and age over 65.

*Stomach (gastric) cancer is also frequently called adenocarcinoma, which is the most common form of gastric cancer.