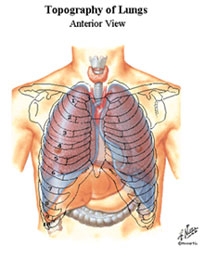 Surgeons at NewYork-Presbyterian/Columbia University Medical Center (NYP/Columbia) treat a wide variety of thoracic diseases and disorders, ranging from cystic fibrosis to lung cancer. A brief summary of some common conditions follows. To learn more about a specific condition, click on the links.

Acute Respiratory Distress Syndrome (ARDS) occurs when the millions of tiny air sacs in the lungs, called alveoli, fill with excess fluid. This can be the result of any kind of injury to or illness in the lung. NewYork-Presbyterian/Columbia established a state-of-the-art program dedicated to ARDS: the Center for Acute Respiratory Failure.

Cystic fibrosis is a severe, genetically-determined disease involving the lungs and gastrointestinal tract, as well as other organs. This disease affects the glands that secrete sweat and mucus. Cystic fibrosis is often treated at home with antibiotics and special exercises for draining mucus in the chest.

Together with asthma and chronic bronchitis, Emphysema is part of a group of diseases that share a common feature—difficulty in expelling air from the lungs. We refer to this group as Chronic Obstructive Pulmonary Disease (COPD). COPD is the most common form of pulmonary dysfunction today.

Our thoracic surgeons have wide experience in the management of benign and malignant Esophageal Cancer and Disorders, including Barrett's Disease. The prevalence of the most common form of esophageal cancer, adenocarcinoma, is increasing faster than any other tumor in North America.

Gastroesophageal reflux disease (GERD), a common digestive disorder with symptoms of heartburn, is a much less dangerous form of esophageal disease that afflicts millions of Americans each year.

Hyperhidrosis refers to excessive sweating in the hands, feet, and other regions of the body that is caused by hyperactivity of the autonomic nervous system. Approximately 1% of adults are estimated to suffer from hyperhidrosis, which can be treated medically or through a non-invasive surgical procedure known as an endoscopic thoracic sympathectomy (ETS).

Lung cancer is the most common form of cancer in the United States. With 170,000 new cases each year, it is the leading cause of death from cancer. Early detection can improve survival. When lung cancer is further advanced, surgery in combination with chemotherapy or radiation therapy may still be curative.

Lung Transplantation can prolong and dramatically improve the quality of life for patients with severe end-stage, non-malignant pulmonary disease and no alternative treatment options. The NewYork-Presbyterian/Columbia University Center for Lung Disease and Transplantation is one of the oldest in the United States—it was established in 1985, just three years after the first lung transplant was ever performed.

Mediastinal tumors, which can be benign or cancerous, form in the area of the chest that separates the lungs and is called the mediastinum. Most treatment is surgical.

NewYork-Presbyterian/Columbia University Medical Center has been designated a center of excellence in the management of mesothelioma by the National Cancer Institute of the National Institutes of Health. We are currently studying several new treatments, including a novel multimodality, or combination approach, which includes vaccine therapy, in vitro chemosensitivity testing, and drug analysis, followed by surgical removal and radiotherapy. NewYork-Presbyterian Hospital/Columbia University Medical Center has been internationally recognized as a leader in the diagnosis and treatment of myasthenia gravis—an autoimmune disorder causing muscular weakness. Our current research efforts ae directed towards the development of a more standardized staging system to allow comparison of different medical and surgical therapies, including robotically assisted minimally invasive thymectomy (removal of the thymus gland).

Pectus excavatum is an abnormal development of the chest wall in which several ribs and the sternum grow abnormally, resulting in a caved-in, or sunken appearance. Our goal is to provide complete clinical resources for the patient and family for diagnosis and decisions about treatment, and if surgical treatment is chosen, for recovery, rehabilitation, and return to school or work, and exercise. Surgeons are able to treat most patients, both adolescents and adults with pectus excavatum using minimally invasive techniques.

Pulmonary Embolic Diseases are divided into two categories due to their different treatment requirements. Acute pulmonary embolism, treated with medication and occasionally with surgery, is a sudden, life-threatening, blockage in the arteries of the lung that occurs when a clot in a vein elsewhere in the body travels to the lung. Chronic thromboembolic pulmonary hypertension (CTEPH) is a condition caused when ongoing blockage of the pulmonary arteries occurs when clots and other matter from the blood builds up in the vessel, inhibiting or blocking the path of blood flow.

Thoracic Outlet Syndrome (TOS) is a term used to describe symptoms that arise from the compression of the subclavian (under the collarbone) artery or vein. The diagnosis is often controversial because there is no universally accepted test to confirm the presence of the compression.

Tracheal Diseases involve the trachea, or windpipe, the airway that leads from the larynx (voice box) to the bronchi, which are airways that lead to the lungs. Diseases include tracheal stenosis, tracheobronchomalacia, and tracheal tumors