The two main ways to perform an operation to remove the adrenal gland (i.e. adrenalectomy) are a minimally invasive or open operation. The most common minimally invasive operation is a laparoscopic adrenalectomy, which involves making 3 or 4 very small incisions and removing the adrenal gland using a small camera and special instruments. Once a patient is advised to have an adrenalectomy, the decision regarding which approach to use is based on the features of the tumor including size, type, appearance on imaging studies, and whether or not the patient has had prior abdominal surgery. In general, the laparoscopic approach is favored over the open approach because laparoscopy significantly decreases discomfort, speeds healing, and leaves only tiny scars behind. In addition, after laparoscopic adrenalectomy, the majority of patients are able to leave the hospital the day after the operation. At the Adrenal Center, we perform 98% of adrenal operations using minimally invasive techniques in order to provide patients with the least amount of disruption to their normal lives.

Adrenal Center surgeons remove the vast majority of adrenal tumors laparoscopically. In a laparoscopic adrenalectomy, the adrenal gland is removed through 3 or 4 very small incisions (each about ¼ to ½ inch in size) and removing the adrenal gland using a small camera and special instruments. Laparoscopic adrenalectomy offers the shortest recovery time and the least amount of postoperative pain. Most patients may leave the hospital within a day or two of the operation. In general, tumors that are smaller than 10 cm in size with a low risk of being adrenocortical cancer can be removed laparoscopically. Approximately 2% of laparoscopic operations need to be converted (i.e. changed over to) to the traditional open incision. The most common reasons to convert to an open operation include: signs of cancer, unexpected findings, difficult anatomy, a tumor that is larger than expected, and a tumor that is stuck (i.e. invading into) surrounding organs. Our surgeons perform two types of laparoscopic adrenalectomy and tailor the operation to the size of the tumor and each individual patient: 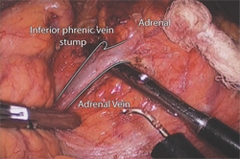 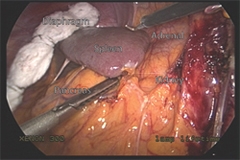 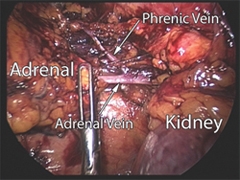 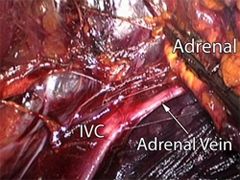 The cortex is the part of the adrenal gland that makes cortisol, an essential hormone. If a person's adrenal cortex is removed during adrenal surgery, he or she may develop adrenal insufficiency and may need to take steroid medication. To avoid this, surgeons can in some cases preserve some of the normal adrenal cortex. This may be possible if a patient has bilateral adrenal tumors (tumors in both adrenal glands) or tumors that are small and clearly not cancer (like aldosterone producing adenomas). Also called partial adrenalectomy, a cortical-sparing adrenalectomy usually involves removal of just the tumor with a thin rim of normal tissue. Cortical-sparing adrenalectomy can be done through any of the laparoscopic or open approaches described above. An experienced adrenal surgeon should explain the risks and benefits of this approach, and whether it is the ideal choice for the patient.

What are the potential risks of adrenal surgery?

Research has shown that the risk of complications in surgery is directly related to the surgeon's experience. Since adrenal surgery is relatively uncommon, it is critical to find a surgeon who specializes in this type of operation. In experienced hands, the risks of adrenal surgery, especially laparoscopic adrenalectomy, are low.

As with any operation, there is a risk of infection and bleeding. Wound infections (i.e. an infection in the skin at the incision site) and abscess (i.e. an infection on the inside) occur in about 1 to 2% of cases but are more likely in open operations. Infections are more common in patients with Cushing's Syndrome because this disease causes poor wound healing. Similarly, although the adrenal gland sits next to some of the biggest blood vessels in the body, significant bleeding and the need for blood transfusion are rare and happen in less than 1% of cases. This is also more likely to happen during open operations and in patients who have pheochromocytoma/paraganglioma and very large tumors. Another potential problem from any type of surgery is blood clot formation (i.e. DVT or deep venous thrombosis). These blood clots can break off and travel to the lungs (i.e. PE or pulmonary embolus). In order to prevent blood clots, sequential compression devices (i.e. Venodynes) are placed on the legs before, during, and after surgery to maintain the circulation. In addition, an injection of a mild blood thinner may be given. Fortunately, DVT and PE are very rare. Lung infections (i.e. pneumonia) are rare in patients who have had laparoscopic adrenalectomy, but can happen in up to 6% of patients after open adrenalectomy. Any surgery in the abdomen may cause the intestines to "fall asleep" for a brief period of time after the operation called an ileus. The ileus happens in less than 3% of patients and usually is better with a few days to a week of the operation. Ileus is more common after open adrenalectomy. Finally, the risk of stroke, heart attack, and other major problems are extremely rare and depends mostly on the patient's overall health and other medical issues. Patients should have a pre-operative evaluation to help determine these risks and potential ways to avoid them.

Adrenal insufficiency is a life-threatening problem where the body is not making enough steroids. Patients whose other adrenal gland is normal should not develop adrenal insufficiency. In fact, a person needs only about 33% of their total adrenal volume to be normal from a hormone standpoint. Therefore, removing only one adrenal gland should leave patients with more than enough adrenal tissue. Adrenal insufficiency usually only happens in patients with Cushing's Syndrome where the other adrenal gland is temporarily "asleep" because the tumor has suppressed it or in patients who have both adrenal glands removed who are not getting enough steroid replacement in pill form. Symptoms of this condition include feeling generally unwell, nausea, vomiting and confusion. Patients may also become depressed and their doctors should be notified right away if friends, family, or co-workers notice a change in the patient's behavior. Patients who have had an adrenalectomy for Cushing's may need steroid medication for a year or more following surgery. Patients who have had both adrenals removed, will require lifelong steroids.

The adrenal glands are surrounded by a number of organs and large blood vessels that may very rarely be injured as they are moved aside (i.e. mobilized) during the operation. The left adrenal gland is surrounded by the spleen, pancreas, stomach, kidney, colon, and their blood vessels. Although it is rare to damage one of these organs (i.e. less than 1%), the spleen is the most commonly injured and may sometimes need to be removed. The right adrenal gland is surrounded by the liver, duodenum (i.e. 1st part of the small intestine), colon, pancreas, kidney, and inferior vena cava (i.e. IVC — the largest vein in the body that takes blood from the lower half of the body back to the heart). An injury to the blood vessels of the kidney may result in hypertension (high blood pressure). For large tumors and adrenocortical cancers, the kidney may need to be removed with the adrenal gland if there is a chance that the tumor is growing into it (i.e. invasion).

After the operation, the patient will awake from anesthesia in the recovery room. Patients typically feel groggy for an hour or so after the operation is over, but should be able to receive visitors at this time. In general, patients should be able to eat, drink, and walk around the night of the operation. Patients who have had an open operation may need to wait until the following day before they can do these things. The Foley catheter (i.e. a special catheter placed in the bladder to collect urine) is usually removed within 12 hours of the end of the operation.

Discharge From The Hospital:

After laparoscopic adrenalectomy, patients may be discharged from the hospital as early as the day after surgery. Patients with Cushing's Syndrome may be asked to stay for 2 to 3 days to begin their steroid taper (i.e. slowly lowering the amount of steroid pills they are taking). On the other hand, after open adrenalectomy, patients stay 3 to 5 days on average, mainly to help control post-operative discomfort.

After Leaving the Hospital:

The overall time until patients feel back to normal varies. After laparoscopic adrenalectomy, most patients have returned to their normal routine after 2 to 4 weeks. The overall recovery time after open adrenalectomy is significantly slower and patients should plan on 4 to 6 weeks of recuperation. Patients should avoid heavy lifting (> 10 lbs) and vigorous activity for a month to avoid hernia formation at the incision. Patients may shower 2 days after surgery, but should avoid bathing (submerging the incision[s] in water) and swimming for 1 week.