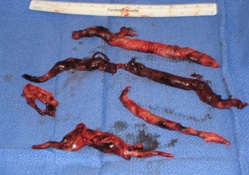 NewYork-Presbyterian/Columbia University Medical Center offers treatment for both acute and chronic blockages in the arteries of the lungs. A sudden blockage, known as an acute pulmonary embolism, begins as a clot in a vein elsewhere in the body that travels to the lung.

Pulmonary emboli are life threatening, with 25-30% of patients dying unless treated immediately. Acute pulmonary emboli are treated by our pulmonary medicine colleagues with medication to thin the blood or dissolve the clot. For patients at risk for repeat pulmonary emboli, a filter may be placed in the inferior vena cava, the large vein carrying de-oxygenated blood from the lower portion of the body to the heart. In rare cases, medical management of acute pulmonary emboli fails to adequately treat these clots, or a patient may have severe hemodynamic instability from a very large embolus. In these cases, a surgeon can remove the offending clot and restore proper blood flow to the lungs. NYP/Columbia surgeons have expertise in all procedures involving pulmonary artery conditions.

Depending upon the type of blockage and its severity, treatment may take the form of medication or surgery. 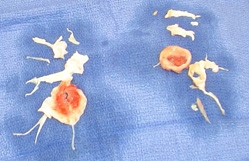 A chronic pulmonary blockage curtails the flow of blood through the lungs, which receive blood from the right side of the heart and deliver oxygenated blood to the left side of the heart, causing high blood pressure in the lungs (pulmonary hypertension). The resulting disease is known as chronic thromboembolic pulmonary hypertension (CTEPH). CTEPH may be mild or severe depending on the position and size of the blockage, which may grow over time. Treatment of CTEPH is not always necessary and depends upon a variety of factors including the location and severity of the blockage.

Ongoing blockage of the pulmonary arteries occurs when clots and other matter from the blood build up in the vessels, inhibiting or blocking the path of blood flow. The causes of these blockages are varied, and many are not well understood, but include:

CTEPH is initially difficult to diagnose because its main symptom in its early stages, shortness of breath, can mimic a variety of conditions. As the size of the pulmonary blockage progresses, and the CTEPH increases, additional symptoms may appear due to stress placed on the heart as it struggles to push blood through the blocked area. As the flow of blood through the lungs is diminished, so is the oxygenation of the blood. Symptoms may include difficulty breathing, water retention in the limbs (edema) due to the heart's reduced ability to move fluid through the body's blood vessels, chest pain, light-headedness and faintness.

Physicians can diagnose the condition using tools including an echocardiogram (sound wave picture of the heart) and a pulmonary angiogram, an X-ray image of the pulmonary arteries. 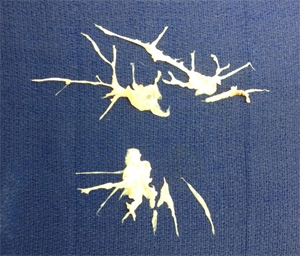 The procedure involves "open-heart" surgery so that the surgeon may view the pulmonary arteries, which connect the lungs to the heart. In order to achieve this, the patient is connected to the heart-lung bypass machine, which mimics the actions of the heart and lungs, oxygenating the blood and pumping it throughout the body. The heart is stopped to control the blood flow to the heart and lungs.

The patient's body is cooled significantly, reducing the need for oxygen and allowing surgeons to halt the bypass machine periodically to view the vessels they are clearing. Bit by bit they gently loosen the clots and remove them. Clots may be as long as 10 inches, extending from the main arteries into the smaller arteries of the lung.

Another type of open-heart surgery is used to treat medication-resistant chronic thromboembolic pulmonary hypertension. Called atrial septotomy, the surgery relieves pressure on the right side of the heart by opening the space between the left and right heart chambers.

In rare cases, a lung transplant may be indicated, especially for young people who have idiopathic pulmonary hypertension. See Lung Transplantation for more information.

Anticoagulants prevent clots by thinning the blood and include drugs such as warfarin, commonly known as Coumadin, and heparin. Once clots have formed, clot dissolvers (thrombolytics) can break them up quickly. Clot-dissolving medication is only used in life-threatening situations because side effects include severe bleeding.

Medications for pulmonary hypertension are numerous and include:

Pulmonary hypertension can be challenging to pinpoint as a diagnosis. Routine physical exams may not uncover the disease and symptoms may be similar to other lung and heart conditions. So a careful work up is important to diagnose pulmonary hypertension. Some combination of the following tests will be done:

Additional tests to evaluate the pulmonary arteries and lungs are: