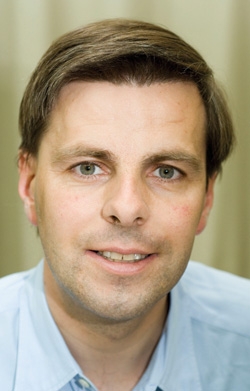 Kidney swaps enable incompatible donors to give to strangers, in return for a matched kidney that can help their own loved ones or family members. The chain of giving can start with a single altruistic donor.

Thirty-nine-year-old Long Island firefighter John McGuinness recently became the lynchpin in a rare three-way kidney swap, performed at NewYork-Presbyterian/ Columbia. After a fellow firefighter and friend died in Iraq, John decided to give someone else the gift of life. He contacted the living donor kidney transplant program at Columbia in February. By April, there was a match.

"There are thousands of people on the waiting list for a kidney throughout the state," John says. "These people will die if they don't get the organ they need. If others could step up the plate and do living donor transplantation, many more could be helped."

All donor kidneys are removed via minimal access surgery. Small incisions mean a faster recovery and minimal discomfort, and donors are usually discharged within two or three days.

"We have over 50 calls a month from people in search of kidneys," says Joan Kelly, RN, a Columbia kidney transplant coordinator. "There's a tremendous need for donors."