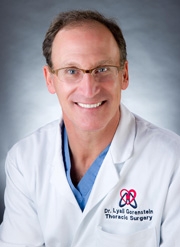 When Leah Richter of Englewood, NJ lost her voice during the spring she was referred to a local ear-nose-and-throat specialist. "He diagnosed a reflux problem and put me on 20 mg of Prilosec. It didn't help."

A colleague then suggested that Mrs. Richter see a second ENT specialist who noticed that her right vocal cord didn't look quite as"good" as the left. He ordered MRI and CT scans of her neck and lungs. The CT radiologist saw a lesion in her lung that was suspicious for lung cancer.

Mrs. Richter, a late-blooming attorney, immediately began searching the Internet. She learned that she is among the 10 percent of people diagnosed with lung cancer every year who never smoked. She was lucky that her voice failed; most patients with early lung cancers have no symptoms. She also learned about video-assisted thoracic surgery (VATS), and that it was a technique used by thoracic surgeons. Further inquiries led her to Kenneth Prager, MD, a pulmonologist at CUMC. He was recommended by several people who had had lung problems.

Dr. Prager, in turn, referred her to Lyall A. Gorenstein, MD Assistant Clinical Professor of Surgery at Columbia University College of Physicians & Surgeons and a surgeon in the Department of Surgery at CUMC, NYPH. Dr. Gorenstein's suggestion that she was an excellent candidate for VATS surgery was a major factor in her decision to choose him as her surgeon. Moreover, his considerable experience with VATS convinced her that he should perform the procedure.

The first step was to confirm Mrs. Richter's malignancy, through testing at the Kreitchman PET Center at CUMC. PET scanning is a relatively new imaging technique used to differentiate benign from malignant tumors. Sure enough, Mrs. Richter's PET scan showed an abnormal lesion, and a needle biopsy confirmed that the lesion was malignant.

Mrs. Richter and her husband, Norbert, listened as Dr. Gorenstein described VATS, a fairly new procedure, as effective and less invasive than a thoracotomy, a large, open chest incision. VATS is a minimally invasive procedure for the removal of early-stage lung cancers. "The procedure I am doing is really the same as open lung surgeries that have been done for the past 40 years," Dr. Gorenstein says. "We dissect every major blood vessel to the lung and staple and divide them, rather than simply stapling off the artery, lung, and bronchus. In Mrs. Richter's case, we removed the lower left lobe.

"I believe this operation is just as good as open surgery, and there is some evidence that it may be better because people recover more quickly and with less pain and less disruption of their immune systems, an important factor in fighting cancer." Dr. Gorenstein is involved in a research study to evaluate the immunological impact of VATS, to see if VATS patients might live longer because of less immunosuppression. The procedure essentially eliminates chronic post-operative pain, suffered by up to 20 percent of people having open-surgery lobectomies.

VATS technology has been made possible by improved video optics over the past few years. Dr. Gorenstein is confident that this operation can be done safely, based on its use in more than 1,000 lobectomies worldwide to date. "There has been a very low rate of complications, and there are many benefits to the patient, both immediate and short-term, and perhaps in the long term as well. That's why it's exciting to be able to offer it to our patients at Columbia University Medical Center."

Mrs. Richter was admitted to the hospital on Tuesday, June 12, and discharged on Friday, June 15. As soon as she got home she was able to walk upstairs. The recovery period varied," Mrs. Richter says. "The pain from surgery subsided over a period of three weeks. Physical activity to 90 percent of normal took another six weeks."

Follow-up care entailed a visit to Dr. Gorenstein at six weeks after surgery and then additional CT scans every six months for two years. "At the time of surgery Mrs. Richter's lymph nodes were clear," Dr. Gorenstein said, "and she will not require any additional treatment, such as radiation or chemotherapy. Her prognosis is excellent."

Her voice, however, is not quite back to normal, and Mrs. Richter plans to have speech therapy to correct the problem. "Her voice is gravelly," Mr. Richter said, "but she can still yell at me!"