Pancreatic cancer is the fourth leading cause of cancer-related deaths in the U.S. Over 44,000 people will be diagnosed with pancreatic cancer this year, and over 38,000 will die. This poor prognosis largely results from the difficulty in detecting the disease before it progresses to advanced stages, when surgery is no longer possible. It is no wonder that researchers are actively searching for ways to identify who is at risk for pancreatic cancer and how we can minimize risks for the disease.

In August 2013, a large study published in the Journal of the National Cancer Institute found a link between dietary patterns and the diagnosis of pancreatic cancer. Using data from the NIH-AARP Diet and Health Study to evaluate diet quality based on the 2005 Dietary Guidelines for Americans, the study compared people who were diagnosed with pancreatic cancer to those who were not. The subjects were AARP members between 50-71 years old (n=537,218). Subjects were excluded if they had previous cancers or consumed diets that were too high or too low in total energy (calories).

The 2005 Dietary Guidelines for Americans are divided into 12 categories,; the higher the score (maximum 100), the more closely the guidelines were followed. 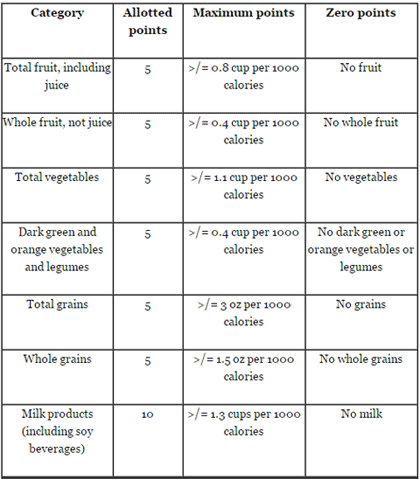 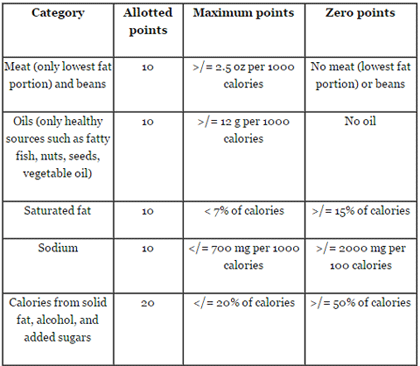 The authors concluded that following a high quality diet may help to reduce one’s risk for developing pancreatic cancer. I believe following a high quality diet rich in vegetables, fruits, whole grains, legumes and lean meats, while low in sugar, sodium, and saturated fat is worthwhile for everyone, in addition to its importance in preventing chronic and/or life threatening diseases such as pancreatic cancer.

Still not sure exactly what/how much you should be eating?

Here are some key points for you to follow from the most current Dietary Guidelines for Americans (2010), with some personal tips to make following them a breeze: