After Breast Cancer Twice in One Year, Early Detection and New Radiation Therapy Made All the Difference 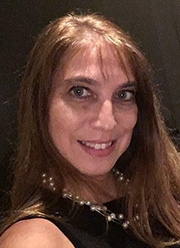 Mammograms were never something Karin Diamond tried to avoid. She got one every year without fail and scheduled her annual wellness appointments to fall six months in between. The way she puts it, “somebody was squeezing my breasts every six months.”

Karin has large breasts, they’re dense, and her great aunt died of breast cancer fairly young. She has other high-risk markers too: she’s light-skinned, Ashkenazi Jewish, and got her period at age 11. “All my life I assumed it was going to happen at some point in the future,” she explains.

The future showed up earlier than expected. On February 1st of 2018, a routine mammogram returned with an abnormality. “I was kind of like really? I’m 50! Don’t I get a couple more years?” says Karin. “But it is what it is, I was not shocked or hysterical or any of those things.”

This visit happened to be her first time getting a 3D mammogram, a new type of x-ray imaging that captures the breast at all different angles, circulating around the breast tissue to create a full 3D image. The traditional 2D mammogram produces only two images: side-to-side and top-to-bottom. Several studies have found that 3D mammograms find more cancers than traditional 2D and reduce the number of false positives.

Just 20 minutes after Karin left the office, her phone rang. “They told me to come back. I went right in that same day, and they did a bunch more tests: ultrasound, mammograms, the whole works,” says Karin. “After that, things moved at a very quick pace.”

A tumor, no bigger than 2cm, had formed in her right breast—Stage 1 breast cancer. Catching the cancer early had immense benefits. Karin had options at her disposal. She quickly scheduled an appointment with Roshni Rao, MD, chief of breast surgery at Columbia University Irving Medical Center, and at the advice of her long-time Obgyn, made an appointment for a second opinion outside of Columbia as well.

“First of all, we were super-duper impressed with Dr. Rao. She drew pictures, she explained things,” says Karin. “She told us what all the different options were: lumpectomy, full mastectomy, she talked about intraoperative radiation versus standard radiation.”

Radiation lowers the risk of breast cancer recurrence, but intraoperative radiation (often abbreviated as IORT) is a relatively new method. With IORT, targeted radiation is given during surgery, in a single dose directly to the area where cancer used to be. Traditional methods use cycles of radiation therapy post-surgery to beam the all or part of the breast.

“When we went to see the other doctor, she didn’t offer intraoperative radiation. That is not something they have, and this was at a huge institution,” says Karin. “She only talked about lumpectomy versus full breast removal and radiation. She didn’t think I needed chemo but didn’t rule it out.”

The tumor was tiny, which meant Dr. Rao thought Karin was a great candidate for intraoperative radiation therapy. It left open the option for full-breast standard radiation in the future. “My husband and I both agreed, we were going to go with Dr. Rao for so many reasons. Number one was intraoperative radiation; it was really important to me to try and save my breast if I could. Number two, just the whole picture that she drew, the explanations that she gave,” says Karin. “We scheduled the surgery for the third week of March.”

The surgery went splendidly, and cancer hadn’t spread to the lymph nodes. “I was very, very happy. I have a slightly bigger scar because the flesh was cooked so-to-speak, but the scar is not even visible anymore,” says Karin. “That was it. They told me to be back in six months for my mammogram. I went away on vacation ten days afterward.”

Six months later and the mammogram revealed ductal carcinoma in situ, or DCIS, on the opposite side of the same breast. DCIS is the presence of abnormal cells inside a milk duct, considered the earliest form of breast cancer. “How that happened since it had only been six months, and I had started Tamoxifen, who knows, but it was tiny, tiny,” says Karin.

Physicians frequently prescribe chemotherapy medications to treat or prevent cancer after successful surgery. Tamoxifen is a selective estrogen receptor modulator (SERM) that works by attaching to estrogen receptors in the breast so the hormone cannot bind to them. One pill every day for five years reduces one’s breast cancer risk by 50 percent.

If this were Karin’s first cancer, Dr. Rao explained, they would not have needed to do radiation at all. “They would have gone in, removed the tiny little DCIS and been done with it,” says Karin. “But second cancer, same breast, six months apart? I had to have whole breast radiation.”

Karin had such a positive experience with intraoperative radiation the first time, she wanted to go for a second round, but Dr. Rao explained, it just hasn’t been done yet. “I was like, I’m willing to be the guinea pig!” she laughs. “My husband was like, no, no, no. So, I had the full breast radiation, just 16 sessions because of how small the DCIS was.”

Karin felt no reaction to the radiation until the day after her last session. “Suddenly, it looked like on one breast I had been lying in the sun for a month, and the other was normal color. Then it faded, and the skin sloughed off,” says Karin. “And I was like, oh, that’s what they meant!”

January of 2019 marked Karin’s first mammogram since the second bout of cancer, and this time, all looked good.

“For me, intraoperative was really the right choice because I didn’t know that six months later I would be going through this again,” says Karin. “If I would have gone with a different doctor and had full breast radiation, I think would have had no choice. Six months later, they would have said ‘Even though it's only DCIS you’re going to need a full mastectomy.’”

For now, Karin is taking it one mammogram at a time and enjoying life with her husband and three kids. When friends ask her about her experience, her most significant point of advice is always, “find a hospital that offers intraoperative radiation.”

Don’t miss an update on news and content from Healthpoints, the blog from the Department of Surgery at Columbia.