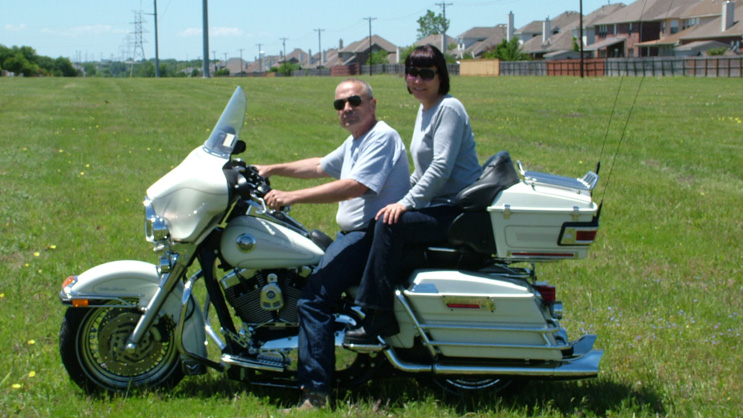 In March 2009, I was diagnosed with advanced pancreatic cancer. The cancer involved the blood vessels surrounding my pancreas and had also spread to my liver. I had terminal, inoperable pancreatic cancer. This news was delivered on my 25th wedding anniversary. My wife and I were devastated, finding little hope in the death sentence I had been given.

I began my chemotherapy in Houston immediately, pledging to fight against my disease. I was not ready to die. Even as life became an endless array of lab tests, chemo infusions, and doctor visits, I tried hard to plan for the future and to make my life take on the meaning it once had.

At the end of my first 9 weeks of chemo, I was given good news. The cancer had disappeared from my liver, and the pancreas tumor had shrunk to half its original size. Shortly thereafter, I began another regimen of chemotherapy, and within these next 9 weeks, my body continued to respond. At the end of this second cycle my oncologist granted me a "chemo holiday," declaring that I would not be given more chemotherapy until things began to worsen.

I was ecstatic, and for the summer months I walked around as if I had beaten the cancer. I talked about my future, got new clothes, lined up activities, and began to believe in things again. I told my friends, I was one of the lucky ones and that I was going to survive.

However, by November, as my weight began to drop and my energy began to fade, the familiar dark cloud returned. I met with my oncologist who explained that although the chemotherapy had decreased the size of my pancreatic mass I was still inoperable, without an operation I would not survive. I again was devastated, feeling lost, hopeless and defeated.

In search of more information and support, I tirelessly surfed the Internet. After reading horrifying statistics and depressing patient anecdotes, I stumbled across a website that read, "offering some hope to those 35% of pancreatic cancer patients considered to be inoperable." These words shook my inner core. Hope.

The website belonged to the Pancreas Center at Columbia University Medical Center. I immediately showed my wife and called to make an appointment. I was scheduled to see Dr. Chabot for a consult in early February. I had a chance, I was going to the Super Bowl, and I was a contender. I was on my way to New York.

When I arrived at the Pancreas Center, I was treated like an old friend and was immediately made to feel comfortable. Within a few minutes I was called into Dr. Chabot's office where I was introduced to Dr. Chabot. He was very personable and intent on learning everything about me, who I was beyond just my medical history. He explained that a major vein had been completely blocked by the cancer but he reassured me that he was prepared to perform the resection if I was ready to accept the risks.

This was an easy decision, Dr. Chabot was able to offer me what I had thought was impossible, a chance to live.

That afternoon I met with several nurses and administrators to arrange and finalize my procedure. Although there were many patients present, I was amazed at their care and attention. As I left that day and returned to Texas, I felt as if I had joined the Pancreas Center team and that I was a desired member. I was confident that my teammates would work hard to save my life.

The day of my surgery finally arrived, and while the details of that day are a blur, the surgery went smoothly. As I recovered in the hospital, Dr. Chabot and his surgical team followed up diligently each day. I was surprised at the time Dr. Chabot would spend with me on these visits. The empathy and dedication that he put into my care was incredible; his sincerity put me at ease.

One evening while my wife was visiting, Dr. Chabot came around to check on my progress. He said that my wounds looked very good and that I was recovering well, even better than he had expected. He then explained that the biopsy results had returned and confirmed that I was cancer free. We had won. My wife embraced Dr. Chabot as she laughed and cried. That moment will forever be engraved in my mind. Tears ran down my own face as I realized that I was one of the lucky ones, I was going to survive. Life was going to be really good.

My wife and I flew home on our 26th wedding anniversary with my future as an anniversary present from Dr. Chabot and the Pancreas Center. For that gift, I will be eternally grateful.

My recovery is complete. I am active—I began working stained glass, caught up with neglected yard work, went camping. I have a life. Thank you to Dr. Chabot and to all of the Pancreas Center staff. Thank you, thank you so very much. The world is a better place because of all of you. Your compassion, tireless effort, and dedication to the fight against pancreatic cancer will allow others to remain hopeful and to dream—just as you have allowed me.

Another Perspective: Bill's Story told by His Wife, Janice

Within the last year, my husband, Bill, was diagnosed with terminal pancreatic cancer, underwent surgery at Columbia University's Pancreas Center and is now cancer free.

Bill and I both have a new lease on life. We have never been happier in all of our 28 years together. Life is wonderful. Both of us have changed dramatically since his illness. We don't sweat the small stuff, and these days it seems as though everything is small stuff.

Bill is getting stronger every day. He mows the lawn, is building a stained glass workshop, and has purchased a heavy sewing machine to make awnings for camping. He is not wasting a minute of life. Heck, we have not watched TV since we returned home from New York. That is a big change, believe me! We talk all the time. What is truly, truly wonderful is that for the first time in a year, we can talk about our future. We HAVE a future.

I tell Bill's story to everyone that I meet. It always leaves others with a smile. I pray that I can reach at least one person with our story, someone who thinks that all they can do is wait to die—we certainly know how that feels. I bought a hat from the American Cancer Society that is black and purple, it reads: Celebrate Hope. I wear this hat in most of my hours, remembering to enjoy each day with an appreciation for my life, Bill's life, our life.