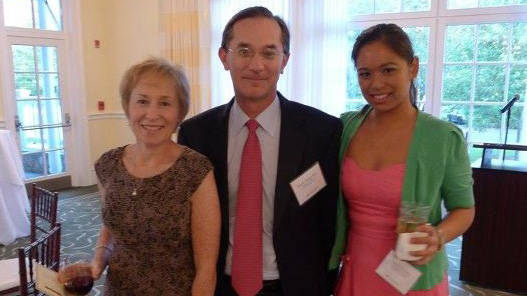 On first glance, the story may appear cliché; a spouse dies, and the surviving spouse gives to a charitable cause, hoping to confer some measure of permanence to his or her loved one’s memory. Repeated in infinite variations, the uplifting closure softens just a little bit of the survivors’ sadness and pain, and makes a small contribution that lasts a little while before fading.

This time, the story is a bit different. This time, the legacy started by one grieving spouse is fueling research that is already saving lives, and that may be the most important work in pancreatic cancer in the last 40 years, experts say.

Muzzi Mirza was a 46-year-old husband, father of three, and a partner in a private equity firm when he learned he had stage 4 pancreatic cancer in 2005. His diagnosis shattered what his wife, Sue Mirza, called “the perfect life” they were then living in Greenwich, CT. Muzzi began treatment, which included chemotherapy at New York Hospital and consultations at NewYork-Presbyterian Hospital/Columbia University Medical Center. Although Dr. John Chabot and Dr. Robert Fine worked with Muzzi to determine his optimal treatment plans based on their research at NYP/Columbia, there was no structure in place at the time to coordinate patient care in tandem. Instead, Muzzi and other patients had to travel to multiple physicians’ offices for different parts of their care – a burden made even more onerous by their serious illness. According to Sue, “It was clear to Muzzi that this was not the way it should be done.”

Indeed, Dr. Chabot was already laying the groundwork for a comprehensive center dedicated to research and treatment of pancreatic cancer, and had begun discussions about establishing and funding the new Pancreas Center at NewYork-Presbyterian/Columbia.

Meanwhile, not only did Muzzi want to improve the way he and other patients received daily care for their disease, but he also wanted to spare other families the same devastation of receiving a pancreatic cancer diagnosis at such a late, largely untreatable stage. He talked with Drs. Chabot and Fine in depth, and he learned about the work Dr. Harold Frucht was conducting regarding genetic causes of pancreatic cancer and methods for early detection.

It became clear that although a cure might be years away, the possibility of early detection and prevention likely held the best promise for successfully reducing mortality from pancreatic cancer in the near term, explains Sue. With his keen business acumen, Muzzi could see that with the right resources, physicians who were working in parallel could together accomplish even more, both in their research and also in optimally treating their patients. “Muzzi could see that the Pancreas Center was a blueprint waiting to happen,” Sue says. “There was a very timely collision of two forces – Dr. Chabot’s in the medical world, and Muzzi’s with his business and fundraising experience.”

His vision and commitment firm, Muzzi pledged one million dollars to the establishment of a program within the new Pancreas Center that would focus specifically on prevention and early detection of pancreatic cancer. His business associates in the Odyssey Partners matched that pledge with another million, and matching funds from a wider circle soon brought the total to about four million, which launched the first five years of the Muzzi Mirza Pancreatic Cancer Prevention & Genetics Program.

In addition, Sue and members of the Odyssey Partners, plus others in the Muzzis’ circle, began the tradition of the fall golf event, an invitational outing held in CT both to celebrate Muzzi’s life and also to raise additional funding for the program. This year’s event on September 19, 2011 brought the total raised to over $400,000 in the five years the event has been held.

With that generous backing, the Muzzi Mirza Pancreatic Cancer Prevention & Genetics Program has coalesced into a dynamic program within the Pancreas Center for the prevention and detection of pancreatic cancer – the first such effort of its kind. Led by Harold Frucht, MD, the program’s comprehensive clinical practice is integrated with a robust research program focused on early detection and prevention. Unique in this country, the program not only pioneers some of the most promising and unique research in pancreatic cancer today, but it quickly translates these research findings to clinical therapies for patients at the center.

At this time, Dr. Frucht and other researchers in the Mirza Program are conducting cutting-edge studies including a trial of stool DNA testing, which shows promise as the first noninvasive test to detect pancreatic abnormalities at a very early stage. Early results are very promising, with tests for DNA mutations in stool samples showing high levels of sensitivity in identifying precancerous lesions such as IPMN (intraductal papillary mucinous neoplasm). If further testing bears out this simple method, fecal testing has the potential to become a routine, standard screening method akin to mammography, and would represent an unprecedented improvement in our ability to detect and treat pancreatic cancer. As Sue puts it, “If the test could be developed into something internists used routinely to screen for pancreatic cancer, that would be the ‘home run’ in fighting pancreatic cancer.”

The Mirza Program maintains a registry and tissue bank for individuals at high risk; this invaluable infrastructure facilitates ongoing clinical, basic, and translational research that would not be possible without the availability of sufficient tissue samples, clinical data, and family and epidemiologic information. In addition to the study of stool DNA testing, the tissue bank supports numerous other studies, such as one on a new vaccine for pancreatic cancer. A newly opened trial, led by M. Wasif Saif, MD, is investigating whether a new vaccine, developed specifically to target pancreatic cancer cells, will help to prevent recurrences among patients who have had pancreatic tumors surgically removed.

Yet another important trial, led by Kenneth Olive, PhD, is evaluating the use of a therapy that could extend survival among patients with metastatic pancreatic cancer. This agent, called IPI-926, inhibits the ability of tumors to build protective walls around themselves, which act as barriers to chemotherapy. Inhibiting this process could allow therapies to work far more effectively, and because of its potential, IPI 926 is currently under study as an approach to numerous types of cancer.

These are just a few of the innovations currently underway at the Pancreas Center and the Mirza Program (for more, see the Pancreas Center’s web site and the Department of Surgery blog). Together, these efforts are making inroads into a disease that has remained almost uniformly fatal for the last 40 years. As they have done each year at the fall golf tournament, Drs. Chabot and Frucht have shared stories about how the program has helped to detect patients’ cancers earlier and to save their lives. According to Sue Mirza, those who contributed to the establishment of the Muzzi Mirza program are extremely pleased that they can already see tangible results in such a short time. “My husband firmly believed that supporting research efforts would pay off and help to lower the mortality rate of this disease,” says Sue. “I am thrilled that following through on his wishes is proving to be successful.”