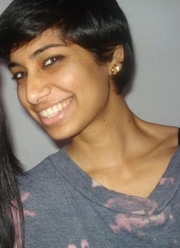 Alia Juman, a 19-year-old, finished her freshman year of college in the spring of 2009. In addition to managing a full course load as a biology major at Stony Brook University, Alia held two jobs on campus and was recognized by her undergraduate institution with an Award for Outstanding Leadership for community service. Alia lived the life of a normal young adult; the only difference between Alia and her friends was her diet. While Alia's friends enjoyed pizza, French fries and other teenage diet staples, Alia found it necessary to stay away from greasy and acidic foods because of her sensitive stomach. For several years she had been experiencing what she thought were symptoms of acid reflux. For a time, her symptoms were managed with antacids and careful monitoring of her diet. At her age, with no family history of cancer or other stomach issues, her doctors felt that her symptoms were the result of a sensitive stomach.

As Alia's freshman year of college came to a close, her "acid reflux" symptoms began to flare up. Her gastroenterologist ordered an ultrasound which detected a mass in her abdomen. Alia's doctor advised her of the potential severity of the situation, using works like cancer and lymphoma. An abdominal CT scan was ordered to better visualize the mass seen on ultrasound. As her gastroenterologist explained the results, Alia recalls, "my heart dropped to my feet. I had a tumor growing on my pancreas. He explained that I needed to see a surgeon immediately to have the tumor removed."

During Alia's surgical consultation at the Pancreas Center, Dr. John Allendorf explained that she had a benign tumor in her pancreas that would require a Whipple procedure to remove it. The surgery and post-operative recovery period meant that Alia would not be able to return to school in time to begin her sophomore year. In August 2009, Alia underwent a Whipple operation at the Pancreas Center to remove the solid papillary epithelial neoplasm (SPEN) from the head of her pancreas. The surgery went smoothly and was a success.

With the help of family and friends, Alia maintained a positive attitude throughout her entire experience from initial diagnosis, to surgery, and to recovery. Though at first Alia was very disheartened by her leave of absence from school, she was determined to make her time off productive and to recuperate completely. Alia maintained relationships with friends and staff from school and volunteered her time on campus when she was well enough.

Alia returned to Stony Brook in the winter of January 2010 to begin her sophomore year. "Looking back", she says, "I am so grateful that I chose to have my surgery with Dr. Allendorf. The Pancreas Center is organized and competent. I felt safe in their hands, 'these are the people you go to' for this type of surgery. They were the best of the best, 'the professionals.'" Alia did not experience any surgical or post-operative complications, did not become a diabetic, and is well on her way to making a full recovery from her condition. Those who know Alia are not surprised that she is already back in the swing of things as she works towards her goal of becoming a college biology professor.

In addition to her full academic schedule at Stony Brook, Alia recently started a support network for young patients with pancreatic disorders. "I want to make sure that young patients do not feel alone during this very difficult time. I want them to know that they have someone they can turn to when it feels like no one else understands. I can share my own experience of taking time off from school, offer advice on how to prepare for such a hiatus and how to return with your head held high." Clearly, Alia Juman is not your typical teenager, but what distinguishes her from her peers has nothing to do with her diet or past medical history. It is Alias's positive attitude, persevering spirit and dedication to helping others that distinguishes her. We are very proud to have her as part of the Pancreas Center team.