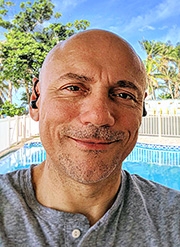 Since I was a child, I remember my parents bringing me to a series of doctors to try and find out the cause of my relentless abdominal pain. Unfortunately, no doctor could accurately identify the condition that was causing my symptoms, thus prescribing me wrong and unnecessary medications. This situation went on for years.

As an adult, my former doctors began preforming upper endoscopies and colonoscopies to find the root of my pain. After several opinions, one of my doctors told me that he could not find anything wrong with me and referred me to a colleague, but not before he had undertaken surgery to remove my gall bladder. This new gastroenterologist conducted several ERCP (Endoscopic retrograde cholangiopancreatography) procedures, with sphincterotomy and stenting. Although these procedures gave me some relief, it was temporary at best. In fact, immediately after the removal of the initial stent, I suffered a major incident of pancreatitis, during which my enzyme levels were over 200 times the normal values and I was hospitalized for 11 days.

Unfortunately, the pain became increasingly worse during the past year. It was the first sensation I experienced when I woke up in the morning. The pain became so debilitating that, at times, I needed to use a cane as support for walking or standing for long periods of time.

After my last ERCP procedure, the doctor said I had a chronic, ongoing pancreatitis and that there was nothing more he could do for me. He recommended that I seek pain management and see a doctor who specialized in pancreatic surgery.

I visited a pain management doctor who understood that I did not want to take anything addictive or that would inhibit my ability to work. She assisted with managing my symptoms, but I was concerned about the prognosis of the underlying condition. I was referred to a pancreatic surgeon who, after reviewing an abdominal MRI, realized that the biliary duct was narrow, thus not allowing the normal flow of digestive enzymes. He informed me that I would need a total pancreatectomy, but that he was unable to perform it himself since he lacked a team of trained doctors. He mentioned several hospitals in the United States.

I left the office confused and scared. My spouse and I were overwhelmed by the reality of the need for this surgery, and we were concerned about undertaking it out of state, which would require frequent travel for pre-surgical meetings as well as follow-up visits after surgery. We did some research online and discovered the Pancreas Center at Columbia University Medical Center was doing this surgery. My spouse made a call to their office at 4 pm on a Friday afternoon. The person who answered the phone was very understanding of our situation, and she said that if we could provide my medical records over the weekend, then Dr. Beth Schrope would be able to meet with us on Tuesday. I worked with my doctors to get my medical records transferred that same evening. When we met with Dr. Schrope, she had already reviewed my records and said she thought from them that I was a likely candidate for TPIAT (total pancreatectomy with islet autotransplantation), but first she wanted to hear me tell my story. Once I expressed how the level of pain was negatively affecting every aspect of my life, she told me I was a candidate for TPIAT. As terrified as I was, Dr. Schrope provided me with the necessary information as well as the reassurance I needed to agree to undergo this radical procedure.

And I am glad I did. My new life began the day of the TPIAT. Following 10 days of hospital recovery and an eight weeks recovery at home, I am no longer taking any pain medication. I am losing weight, regaining my strength and stamina, and taking insulin with my meals, which has proven to be no problem at all. I am so grateful to be retaking my life and to Dr. Schrope and her team of doctors who made it possible.