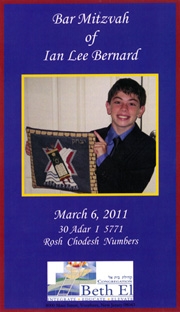 In the Jewish religion a boy becomes a man at thirteen years of age by having his Bar Mitzvah. As part of this tradition, Ian Bernard was asked to find a worthwhile cause to support with a portion of his gift money. After considering all the potential organizations, Ian decided to donate a portion of his funds to the Pancreas Center at Columbia University in honor of his grandfather Barry, who fought a brave fight with pancreatic cancer until he passed in December 2008.

Ian hopes that by donating funds to the laboratory research of Dr. Robert Fine, Director of Medical Oncology at the Pancreas Center, it will aid in his quest to make pancreatic cancer a thing of the past.

From all of us at the Pancreas Center, we would like to thank Ian for this selfless contribution as we carry on our mission to treat pancreatic cancer.