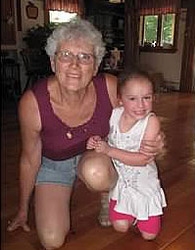 June 5, 2002 was a very special day for me because my first granddaughter was born. That evening, however, I received a call from my oncologist asking if I was alone. I told him I was to which he replied, "I have some bad news. You have pancreatic cancer." Just several years prior, in 1997, I had lost my husband John to pancreatic cancer at the age of 66. He had only lived eight and a half months after being diagnosed with the terrible disease. I could not believe that the affliction of pancreatic cancer was once again impeding my life.

My story begins in April 2002, when I began experiencing severe backaches that continued to worsen. I thought I had simply pulled something, so I dismissed the pain and did not seek medical treatment; but as my back pain augmented, I developed an itch as well. After discussing these issues with my general practitioner I tried four different treatments, none of which alleviated my symptoms. In my next visit with my general practitioner I began to turn yellow. I was immediately taken to the operating room where a stent was placed in my bile duct, successfully relieving the itch. Following this operation, I underwent numerous tests, all of which came back negative. Yet the doctor still believed things didn't seem quite right. He said, "I'm not saying you have cancer but let's be on the safe side," so he scheduled an ERCP with biopsy.

After learning on June 5, 2002 that I indeed had cancer, I arranged an appointment at Columbia University Medical Center with Dr. John Chabot, Director of the Pancreas Center. Dr. Chabot felt that my only option was the Whipple surgery. After he performed a successful surgery on June 21, 2002, I sat with thumbs up as I was brought out to my support system of cheering family and friends. Dr. Chabot was hopeful but informed me I had 4/5 lymph node involvement and thus needed to undergo both radiation and chemotherapy.

In mid-August I began a six-week treatment consisting of chemotherapy 5FU via fanny pack as well as radiation with my oncologist. The scan following the treatment showed that the cancer had metastasized to my liver — it didn't look good. My oncologist estimated that I had roughly four months to live and asked if I had my "affairs in order." He prescribed Gemzar and Taxotere, which I stayed on for the next two years — surpassing the four month estimation by a landslide.

Since then, none of my scans or blood work has shown any visible signs of active disease. I have had some complications following my illness, such as pancreatitis and high fevers, but today my life is wonderful and I truly consider myself a walking miracle. On June 30, 2012 I will be gathering with my family and friends at a "celebration of life" party. My ten-year-old granddaughter will be there as well, selling "cure pancreatic cancer" bracelets. She hopes to raise awareness and aid the funding for pancreatic cancer research, ultimately contributing to finding a cure for this lethal disease.

I honestly never thought I would be one of the lucky ones, but I am still here, fighting every day. None of this would have been possible without Dr. John Chabot and the Pancreas Center, as well as the continual encouragement and support of my family and friends. I cannot stress enough how important it is to never give up hope, keep fighting the fight and stay positive!