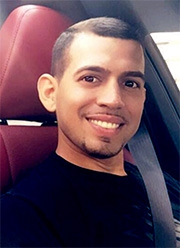 My story begins on October 9th, 2016. Born and raised in Brooklyn, New York, I had lived 29 years without any significant medical history besides a bout of childhood asthma.

I remember waking up very early in the morning with abdominal pain and constant vomiting. My eyes and skin began to yellow, and I developed a fever. My urine became a dark yellow/brown. I went to a local hospital, where I underwent a CT scan and MRI. They showed gallstones in my gall bladder and masses on my liver. Three different doctors told me I might have cancer and recommended I follow up at Columbia University Medical Center/NewYork-Presbyterian. I was discharged, still with abdominal pain and the high fever.

I went CUMC/NYP that evening, where I was diagnosed with Stage 3 cholangiocarcinoma, a very rare gallbladder cancer (lucky me). I was also introduced to Dr. Michael Kluger, a surgeon who specialized in cases like mine. Three days later, Dr. Kluger removed my gallbladder and part of my liver. Five days after that, I was home from the hospital. I knew it was going to be a long recovery.

What I wasn’t expecting was returning a month later with severe abdominal pain and back spasms. I had woken up in the middle of the night screaming because of the pain, terrified to move because each time I did, it hurt more. It felt as if someone was stabbing my lung over and over again. When I returned to the hospital, CT scans and MRIs showed fluid collecting in my liver and an infection. I went into another surgery, where they placed a drainage tube to collect the fluid. I was exhausted from all the scans, the sleepless nights, the endless needle pokes, the pain, and the surgeries. I wanted to give up.

A few weeks later, the infection was over, and all the fluid successfully drained. I was so happy for the drainage catheter to be removed. But now it was time to focus on the cancer.

I met with my oncologist, Dr. Gulam Manji, and NP Jaime for the first time to discuss chemotherapy. The information was overwhelming. For the next six months I would go to the Pancreas Center at CUMC/NYP for chemotherapy every week. Only after the course of chemotherapy would my body get a break.

Those six months were horrible. I lost the majority of my hair and a lot of weight. I had no appetite, and I was weak and tired all the time. I fell into a deep depression, and began to cut my family and friends from my life. I felt alone – no one could understand what I was going through. I didn’t leave the house, or see anyone. Even after the treatment, the anxiety about whether the cancer had gone – or gotten worse – was unbearable. It was dark and lonely.

I wanted to snap out of my depression and live a normal life. I started to seek support. I went back to the center and started asking questions, and I was flooded with options and referrals. I met with psychologist Dr. Ian Sadler, who introduced me to Leigh Leibel, a yoga and meditation instructor. I joined Gilda’s Club, a community organization for people living with cancer like me, and families and friends. I also joined a 12-week physical activity program via LiveStrong, designed to get cancer patients and cancer survivors get back on their feet.

Throughout it all, from the first time I stepped into CUMC/NYP hospital, to the first nurse who attended me in the ER, all the way to the last day of chemotherapy at the Pancreas Center, my family and I have received nothing but kindness, love, and patience. We all felt like we naturally adopted another family here.

I would like to sincerely thank Dr. Kluger, Deidra, Dr. Manji, NP Jaime, Franklin, Dr. Sadler, Leigh Leibel, and all the staff at the Pancreas Center and the nurses and doctors whose names I may not be able to remember but have supported me throughout this process. I have been truly blessed to have such an amazing support group and a new family I can go to for anything.

Take it from me because it took a while to learn: you are not alone, even though it can feel that way. We are here with you every step of the way.

On September 18th, 2017, three months after my last chemotherapy session, I went in for my post treatment scan. There was no evidence of cancer within the chest, abdomen or pelvis area. I can finally say I am taking control of my health, not the other way around.