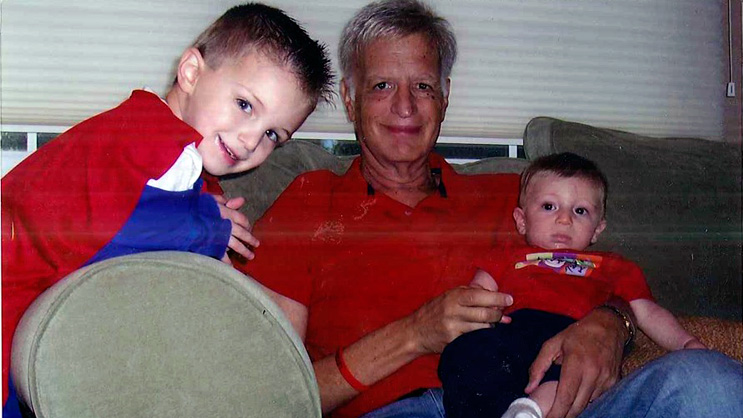 You CAN beat pancreatic cancer, but you need a lot of help. I was at JFK Hospital in Edison, New Jersey in November 2011 waiting to have my gall bladder removed. During a pre-op endoscopic procedure, Dr. David Rosenheck saw a tumor on my pancreas. He and his partner, Dr. Steven Hodes as well as a surgeon all said that I HAD to see Dr. John Chabot at NewYork-Presbyterian Hospital/Columbia University Medical Center. These doctors, none of whom I knew, contacted Dr. Chabot on my behalf, and I was transferred several days later. My wife Beth and I met with Dr. Chabot and Dr. William Sherman, who would be my oncologist. Dr. Sherman was running a clinical trial and both doctors invited me to join. This was the best decision I have made in my life other than asking Beth to marry me.

The goal of the treatment was to shrink the pancreatic tumor with chemotherapy and radiation and reduce it enough so that Dr. Chabot could remove it with the Whipple surgery. I endured three arduous rounds of chemotherapy and five and a half weeks of daily radiation. Unfortunately, an MRI in July 2012 revealed a metastasis to the liver, which eliminated the possibility of the Whipple. That tumor was removed by ablation therapy in August 2012, and I went back to chemotherapy through October 2012. Finally, on August 30, 2013, Dr. Chabot was able to perform the Whipple and I am now cancer free.

I know that if I had not been referred here and placed under Dr. Sherman and his nurse practitioner Kyung Chu's care, I would not be here today. Clearly, the first step in conquering this dreadful disease is to access the finest medical care available. You need more than just the right physicians, although without them you have NO chance. You MUST have a strong mental fortitude. I met with a psychiatrist within one week of returning home in November 2011. I had never before been treated by Dr. Lichtman or any psychiatrist, but I just knew that I needed more than medicine to fight pancreatic cancer. I do recall him asking me what I feared the most, and I replied that I did not think I was going to die. I did not answer honestly; of course I was afraid of dying. I did tell him that I was going to maintain a positive attitude because I had heard that that helps patients. He strongly confirmed that medical research reveals that patients with a positive attitude do much better than those with negative feelings. Over the course of the next 22 months I met or spoke with Dr. Lichtman on the phone many times. He helped me deal with my issues and prescribed me medication to keep my mood up, increase my appetite and help me sleep.

I joined a new synagogue and my son Jonathan noted, "a little divine inspiration can't hurt." I am not particularly observant, but speaking with the rabbi from time to time was comforting. He was very easy to speak to, and I felt a positive energy emanating from him. The congregation was there for me in the event that I needed any type of assistance. I also had Lutherans praying for me as well as Catholics lighting candles. I appreciated all of these gestures of support from my family and friends.

I don't want to sugarcoat my experience. There were many dark days, weeks and months in the hospital when I was dealing with the effects of chemotherapy, serious infections, catheters, drains and IVs. I spent so much time in bed during the winter of 2012 that I could not walk or even sit up on the side of the bed. I had to relearn to walk with physical therapy. My daughter in law, Amy, was pregnant with my second grandson during that winter, and I cried thinking that I would not live to see him; I did not want the baby to be named after me. I also dreaded the thought of how my almost three-year-old grandson, Aaron, would deal with his Papa's death; I felt that all the adults could handle it, but what do you tell a three year old? This kept me fighting.

If I may be permitted to quote myself, "I pride myself on my sense of humor." Somehow through the interminable days in the hospital, I kept the nurses smiling, and my family and friends saw the old me. I was amazed by the incrediblely hard job the nurses have, and I think I was one of their favorite patients because I did not complain and I helped make their work easier.

Finally, to survive you need a strong support system. Beth and I have been married for 44 years; she has been my rock. She has kept the NJ Transit and MTA's bottom line solvent with her ticket purchases to and from New Jersey. She has buoyed my spirits and been alongside me at every step of this tortuous journey. She created an 85-person e-mail list to keep our friends and family updated with every new development. My children Jonathan and Scott believed from day one that I would beat this. I never had a problem getting rides to the city for chemo or doctors' appointments. My family and friends kept in touch so often that I had to switch my cell phone plan from limited calls and texts to an unlimited plan - best money I ever spent.

Several people have called me their hero because of the way I have dealt with this disease. The only time I want to be a hero is when I play Super Heroes with my grandchildren Aaron and Jake. However, if anything I've said here gives hope to a pancreatic cancer patient and encourages him to fight harder or improve her mental outlook, then I will consider myself heroic.