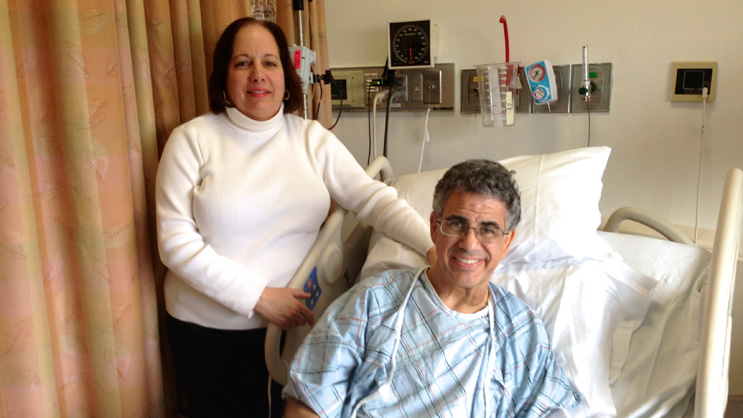 In October 2012 at the age of 55 Robert DiChiara was picking pumpkins with his son when he developed abdominal pain that continued to worsen. A visit to his physician revealed that he had a tumor at the head of the pancreas and he was diagnosed with stage 3 adenocarinoma. Robert was told that he had roughly four months to live, so he took action immediately.

Robert underwent 20 weeks of chemotherapy and 28 sessions of radiation to shrink the tumor. Knowing that the only way to beat the cancer was through surgery, Robert began consulting surgeons throughout the country. Many surgeons were hesitant to operate on Robert because his stage 3 pancreatic cancer encompassed the hepatic artery, celiac artery and portal vein, rendering surgery very difficult. Robert had heard of Dr. Chabot and the Pancreas Center through friends and Bob Brown, who was very active in pancreatic cancer awareness. Dr. Chabot proposed the Whipple procedure in conjunction with nanoknife therapy. Nanoknife therapy is a novel approach to treating pancreatic cancer when there is arterial involvement. After speaking with Dr. Chabot, Robert made the informed decision to undergo treatment at the Pancreas Center. He was confident that Dr. Chabot was the best surgeon at the best center with the necessary skills and tools to cure him.

The surgery was successful and in an effort to lead a healthier new life, Robert immediately made improvements to his diet and exercise routine. For example, he began walking daily to improve his physical fitness. At first, he could hardly walk, but his determination and hard work paid off and soon he was walking several miles a day. Today Robert is once again enjoying the activities he loves, such as spending time with his wife and son and gardening.

Robert advises those going through a similar experience to find someone who was successful and follow their path. He recommends doing everything within your power to help yourself and most importantly, to never give up hope. You must believe that you will make it no matter what, regardless of the odds that are against you. To Robert, even the smallest improvements were victories and this emboldened him to never stop believing that he would overcome pancreatic cancer.

Robert encourages those with questions to contact him at rdichiara@gmail.com.