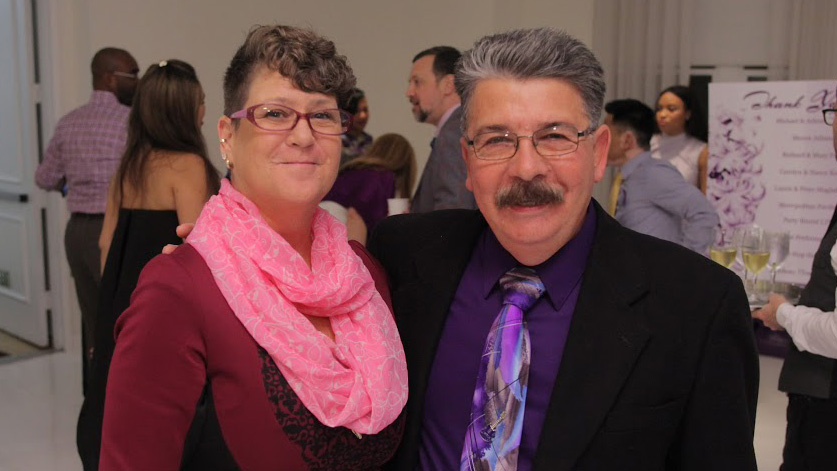 My name is Suzanne Musich; I was one of the few fortunate candidates eligible for the Whipple Procedure. The radio and television advertisement from the Lustgarden Foundation states, “only 6% of all patients diagnosed with pancreatic cancer will survive this disease.” Those who are diagnosed are not given much hope.

My story began on March 10, 2014. I was not feeling well for a few weeks before this but that day I had an appointment with an orthopedic doctor for knee pain. I awoke that morning and noticed that my bowel movement was white in color and my urine was dark brown. I called my primary care physician Dr. Ibelli, he told me to come to his office immediately. He took blood and urine samples and noticed that my complexion was mildly jaundiced.

At noon on March 11, I received a phone call from Dr. Ibelli telling me to report to Nyack Hospital for further testing. He said my bilirubin numbers were very high and further testing was needed. I spent three days in in Nyack Hospital while they did ultrasounds, x-rays, CT scans, and MRIs to find a conclusive diagnosis. They ruled out gallbladder problems and pancreatitis. It was decided that an endoscopy of the pancreas was needed. I was scheduled for March 13.

When I awoke from the anesthesia in the PACU, Dr. Langerman told my husband Michael and I that it was definite. I had pancreatic cancer. He told us that the tumor was small in the head of the pancreas and could be operated on. He recommended Dr. John Chabot, the best in the country, at Columbia Presbyterian Hospital.

Once I was discharged from Nyack Hospital and got home, I immediately called The Pancreas Center and explained to Shenelle my circumstances. She was very friendly and upbeat and told me to get copies of all scans and written reports. We faxed over the written reports and mailed copies of the actual scan. On March 19, I had my first consultation with Dr. Chabot. He was cool, calm and collected. He told me that I was a prime candidate for the Whipple Procedure, and there was an excellent chance for successful removal of the tumor. We scheduled the operation: Monday, March 24.

We completed the pre-op testing that same day. I was contacted by The Pancreas Center a few days later about participation in a study for the hospital and I agreed to have a CT scan that they could refer to before and after the operation. So, within 10 days, I was diagnosed with pancreatic cancer and I was prepping for surgery. This was unbelievable and terrifying.

The day of the surgery, I arrived at 4:30am with my hair dyed purple and wearing a goofy hat. Maybe people thought I was crazy, but they probably also remember me. After 6 and a half hours of surgery, Dr. Chabot came out to tell Michael and my daughters, Jennifer and Nicole, that he was finished. Stuff was removed, parts were taken out, and ducts were reconnected.

Throughout my recovery time, everyone at the Pancreas Center was a pleasure to work with. Dr. Chabot was at my bedside daily after the operation making sure my insides were working properly. Dr. Kuo and Dr. Kluger followed up daily. When we would return to the office for follow-ups, Gabby and Patrick were very helpful in tweaking the medication to help my stomach problems.

After a week of recovery and sometimes walking around the halls of the Milstein Pavilion in my Wonder Woman robe, I was allowed to go home. It was April 1, 2014 but this was no prank: I was alive and going home. I was told that sometimes it takes a while for the stomach to resume normally after the operation. Well, a week later, I was re-admitted to Columbia Presbyterian due to stomach complications. I endured more scans and test; just to see how the healing was going. Again, I received daily visits from Dr. Chabot and words of encouragement.

In May, I had to return to Nyack Hospital for three days due to gastritis issues. They tweaked the anti-nausea medication again and assured me that everything internally was working properly. Six weeks after surgery, I went to Dr. Chabot for a follow-up visit and I was told to schedule chemotherapy. Dr. Kluger installed my port and I began my next round of treatment. At this point, Michael told me that I would have to fight for my life and that this was not going to be easy.

After two cycles of chemotherapy, I was given a one week break before beginning radiation. My radiation treatment, in conjunction with chemo pumps, would last six weeks. After the end of October 2014, all of my treatments were complete. I was mentally and physically exhausted. But, I was alive and we could celebrate.

We went to Disney World with our family. We flew down with Jennifer and her family: Victor, her husband, and her two children, Illyana and Alexander. Nicole was already vacationing in Disney with her boyfriend, Mike. We dressed in INCREDIBLES tee shirts and stormed the Magic Kingdom. Spending that time in the happiest place on earth with my family was memorable and helped to erase the previous nine months of hardship. The only thing more incredible than our vacation was, all the people I have met along the way from the Pancreas Center.