Most papillary thyroid cancers do not cause symptoms (i.e. they are asymptomatic). In fact, many patients will not know that they are there. Patients with large nodules may notice a palpable mass (i.e. a mass they can feel) or a visible mass (i.e. a mass they can see). Very large nodules may cause compressive symptoms which include difficulty swallowing, food or pills getting "stuck" when they swallow, and pressure or shortness of breath when lying flat. In cases of advanced cancer that are growing (i.e. invading) into surrounding structures, patients may develop hoarseness or difficulty swallowing. Enlarged neck lymph nodes that are concerning for cancer include those that are non-tender, firm, growing, and/or do not shrink over time. Patients with compressive symptoms, enlarged lymph nodes, hoarseness, and/or a rapidly growing nodule should seek medical evaluation right away.

When a thyroid nodule is discovered, a complete history and physical examination should be performed. In particular, the doctor is looking for risk factors for cancer that include: a family history of thyroid cancer, a history of radiation exposure to the head, neck, and/or chest, age less than 20, age greater than 70, male gender, very hard nodules, enlarged lymph nodes, and/or hoarseness. After the history and physical exam, a TSH level should be checked to see if the patient is euthyroid (i.e. normal thyroid function), hyperthyroid (i.e. hyperactive or overactive thyroid), or hypothyroid (i.e. underactive thyroid). In general, it is unusual for hyperthyroid patients to have cancer while patients who are hypothyroid may have a slightly higher rate of cancer. Most patients with thyroid cancer are euthyroid.

The next step in the work-up of a thyroid cancer is an ultrasound (USG) of the neck. There is no radiation associated with an USG. An USG is the best test to look at the thyroid and will allow the doctor to see the size of the thyroid and specific features of the nodule(s) including: size, number of nodules, if there are calcifications (calcium deposits), echotexture (i.e. how bright or dark it looks on USG), borders, shape, and if it is solid or cystic (i.e. fluid-filled). In general, USG findings that are concerning for thyroid cancer include microcalcifications (i.e. microcalcifications), hypoechoic nodules, hypervascularity (i.e. more blood vessels than normal), irregular borders, and enlarged suspicious lymph nodes.

The best test to determine if a thyroid nodule is benign or cancer is a fine-needle aspiration biopsy (FNAB). In this test, a small needle (like the needles used for drawing blood) is placed into the nodule either by USG or feeling the nodule with the fingers. Cells are removed from the nodule into the needle (i.e. aspirated) and looked at under the microscope by a specially trained doctor called a cytologist. There are a number of different guidelines as to which nodules should be biopsied, but in general, nodules over 1 cm should be biopsied. If a patient has risk factors for thyroid cancer (especially a family history of thyroid cancer or exposure to radiation therapy) or suspicious findings on USG, then nodules over 0.5 cm should be biopsied. The FNAB may give one of 4 results: 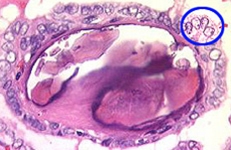 Of note, radioactive iodine (RAI) scans used to be performed routinely for patients with thyroid nodules because "hot" (i.e. hyperactive nodules) were rarely cancer (less than 1%) while "cold" (i.e. underactive nodules) carried a 10% risk of cancer. However, FNAB is far more accurate for determining the risk of cancer and RAI scans are mostly only used in cases of hyperthyroidism.

There are three main parts to the treatment of papillary thyroid cancer:

The best treatment for papillary thyroid cancer is almost always total thyroidectomy (i.e. removal of the entire thyroid). There are a few very specific situations in which some doctors will remove only the half of the thyroid with the cancer (i.e. thyroid lobectomy), but most doctors recommend a total thyroidectomy because:

Risk of Complications With
Prophylactic vs Therapeutic Central Neck Dissection

If the lateral neck lymph nodes (i.e. the lymph nodes surrounding the carotid artery and jugular vein) are involved with papillary thyroid cancer, then an operation called a modified radical neck dissection will be performed either at the time of the total thyroidectomy or in the future. This operation involves removing the lymph nodes along one side of the neck. After the operation, this area of the neck is usually numb for a period of time because the nerves to the skin in this area are purposely severed in order to remove the diseased lymph nodes. Other than this numbness, there are no long-term effects of having these lymph nodes removed.

Sometimes both the left and right lateral neck lymph nodes are involved with cancer. If this is the case, then modified radical neck dissections on one side and then the other are performed about 2 months apart. This delay is to allow time for healing on one side before operating on the opposite side. Performing the lymph node dissection on both sides at the same time could lead to unnecessary swelling (edema) of the head and face if time is not given between operations for alternate pathways of blood and lymph flow to form.

After removal of the entire thyroid, patients will need to take thyroid hormone replacement pills (usually one pill a day for the rest of their lives) in order to replace the hormone that the thyroid would normally make. Patients with thyroid cancer are typically given a slightly higher dose than patients without thyroid cancer in order to suppress or block any stimulation for thyroid cancer cells to grow. The thyroid hormone replacement pill tricks the brain into thinking that enough thyroid hormone is being manufactured by the thyroid gland, therefore shutting down the brain's production of TSH (thyroid stimulating hormone which normally encourages the thyroid to make thyroid hormone). This is important because if TSH is left at high levels, it can stimulate both the remaining normal thyroid as well as any thyroid cancer and metastases to grow and enlarge. The thyroid hormone suppression dose for cancer is usually calculated to be 2 mcg/kg. In order to maintain a dose of thyroid hormone that is right for you, blood tests for thyroid function will need to be checked periodically. Generally, these blood tests are done every two months after surgery until a stable dose has been achieved, after which they may be done less frequently. Ask your doctor what is your correct individual dose.

Fortunately, patients with papillary thyroid cancer rarely need chemotherapy or traditional external beam radiation therapy. External beam radiation is typically used in cases where the cancer has invaded into surrounding structures like the esophagus or windpipe (i.e. trachea). Finally, many people want to take an active role in their recovery from thyroid cancer. The Thyroid Center advises a healthy lifestyle and diet, including decreased alcohol consumption, avoiding cigarette smoking, and eating a diet which is low in fat and high in fiber. These changes are recommended to reduce many types of cancers, not just thyroid.

After surgery for papillary thyroid cancer, it is important to be examined regularly for signs that the cancer may have recurred. In general, patients should have a thyroglobulin blood test, TSH level, and USG of the neck every 6 months to a year. If the thyroglobulin level starts to go up, there are suspicious physical exam findings, or there are concerning nodules on USG, a RAI scan and/or FNAB may be done to determine if there is a recurrence.

If you are dealing with a thyroid issue, our team at the Columbia Thyroid Center is here to help. Call (212) 305-0444 or request an appointment online.