History of Medicine: The Woman Behind the BRCA Gene 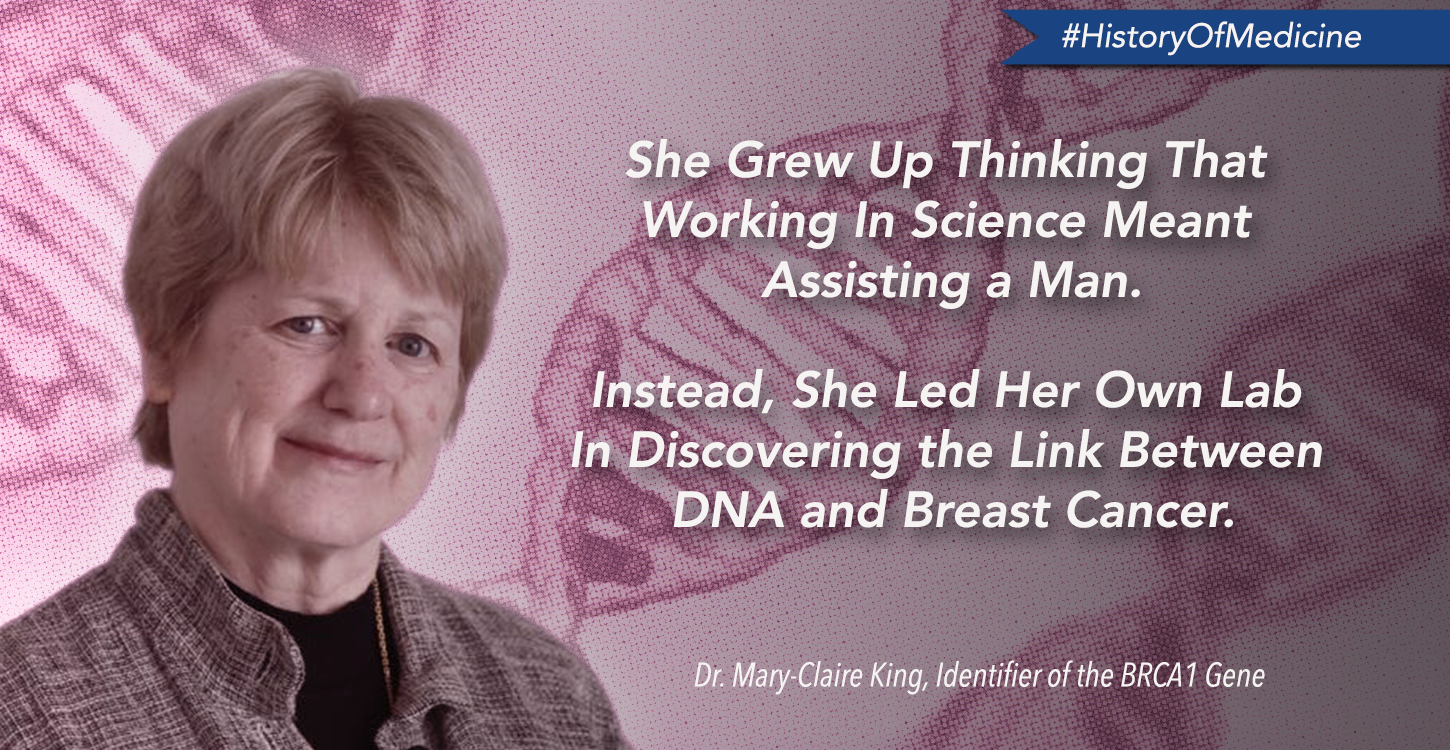 “I always assumed I would be an assistant to someone else, because there have always been women in those roles.  And I assumed implicitly that ‘someone else’ would be a man.”

These are the words of Mary-Claire King, PhD, from a 2014 interview with Time.com.  Fortunately for the thousands of people her work has helped save, Dr. King didn’t settle for being an assistant.  Instead, she became a pioneer.

You’ve probably heard of the BRCA genes.  We all have them, but some of us have mutated versions that put us at a greater risk for certain cancers--most notably breast and (for women) ovarian cancers. It was also recently discovered that there may also be a connection with pancreatic cancer.  Knowing the status of your BRCA genes can be a critical step towards preventing and treating these deadly diseases.  And the reason we know about BRCA in the first place is due to the revolutionary work of Mary-Claire King.

Today, we understand that cancer is a genetic disease, the result of DNA errors and mutations.  But in the 1970s, as Dr. King was beginning her professional career, the popular theory was that cancer was caused by viruses.

There was evidence behind the viral theory (and today we understand that certain viruses, like HPV and hepatitis B, can in fact cause cancer), but it couldn’t explain a key observation made by Dr. King: breast cancer seemed to be much more common in some families than others.

A virus wouldn’t be expected to run in the family, but what if there was something else being passed along between family members?  What if there was a defective gene that was causing the more frequent cancers?

With a group of researchers, she set off to find it, and in 1990 they were able to link what she named the BRCA gene to chromosome 17 and an increased risk of breast and ovarian cancer in many families.

Dr. King’s seminal work launched the entire field of genetic screening for breast cancer, which women at risk can now access with relative ease. In a move that adds ‘human rights advocate’ to her list of titles, King is now pushing for a new policy that calls for every woman over age 30 to be screened for BRCA mutations. As she explains, about half of women with cancer-causing mutations are unaware they carry that risk. These mutations are inherited from mothers half the time, and from fathers half the time. If a woman’s father did not happen to have a sister, or if his mother or sister did not happen to be diagnosed with breast or ovarian cancer before they died, that BRCA mutation may be completely overlooked, leading her to think she is not at higher risk. With the price of genetic testing falling and the quality improving, Dr. King believes there is ‘no reason’ why every woman should not receive testing as part of her normal health care, which would then allow them to make choices about treatment earlier rather than later.

Her work has improved the health of many, and it has also helped changed perceptions about women in science.    In that same 2014 Time interview, Dr. King went on to say: “Acceptance in principle of women in the field is completely different [today] and that’s absolutely fabulous; it’s just splendid.”  That acceptance is due, in no small part, the tremendous contributions of women like her.