Center for Innovation and Outcomes Research 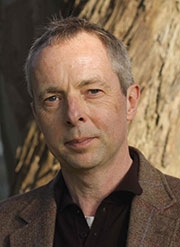 Nigel Bunnett, PhD, is an internationally known expert on pain, itch and neurogenic inflammation. In 2016, he joined the Columbia University Departments of Surgery and Pharmacology where he has been exploring signaling pathways that can lead to more effective pain management. His experiments on the spinal nerves of animals have produced important insights into how pain receptors work and why so many of our palliative drugs are ineffective.

Our current medications target receptors at the surface of nerve cells that transmit pain. Yet Dr. Bunnett has found a way to break into the cell, rather than simply knocking at its door. By targeting receptors in these intracellular compartments, called endosomes, Dr. Bunnett suggests that we can create more potent, and longer lasting, pain control.

In May 2017, Dr. Bunnett published his findings in the journal, Science Translational Medicine. Understanding the function of a receptor (the neurokinin 1 receptor, NK1R) within pain-transmitting nerves, he says, sets the stage for a whole new class of therapeutic agents providing more sustained pain relief. He has recently identified other key receptors as well. We recently spoke with Dr. Bunnett about his research and its long-term implications for clinical practice.

Why do we need a new class of pain relievers?

Current therapies for chronic pain are often ineffective and they can produce unacceptable side effects. Right now, the opioid epidemic is a leading cause of medication-induced death. And there are less lethal, but still very troubling side effects like constipation and respiratory distress.

We have discovered a new mechanism of pain and identified a potentially new treatment which is distinct from the use of opioids and should give us much better results.

How close are you to actually creating a new pain reliever?

We have several patents on our new technologies, are establishing a start-up company (Traffic Therapeutics) and collaborating closely with Takeda Pharmaceuticals, a major pharmaceutical company, to develop therapeutic agents based on our research.

Can you describe the specific pathways you have targeted?

My work focuses on G-protein coupled receptors―the largest family of receptors in the body. It has almost 1000 members, and they participate in all biological processes. One-third of all clinically-used drugs interact with these receptors.

What are the implications of this discovery?

It may change how we deliver not just pain relieving drugs, but almost any therapeutic agent. While we focused on the NK1R in our initial study, we have since found other endosomal receptors, giving us more targets to pursue.

Will this new class of drugs be any easier on the body?

They won’t have the side effects of opioids; they won’t cause respiratory depression or constipation. And they won’t cause addiction. In fact, these new drugs may actually turn out to be completely free of side effects. Knowing what we do about endosomal processes, it may soon be possible to modify the opioids so they don’t cause so many problems.

Why did you dedicate your life to the study of pain mechanisms?

Chronic pain afflicts one in five people in the course of their lifetime. And I’ve also observed this first hand. When my mother was very ill with cancer, she was in severe pain. She was given opioids and she had to endure the awful side effects.

I have been working on pain since about the year 2000. Before that I concentrated on the mechanisms of inflammation in digestive disease. Today my work focuses on pain and chronic itch, which can be exceedingly debilitating.

What’s the evolutionary function of pain?

Pain is a completely normal protective mechanism. It allows you to be aware of danger and move away from it. There are people who are genetically unable to sense pain, and they can die from their injuries because they simply aren’t aware of them. Normally pain is very tightly regulated. When it becomes dysregulated, it becomes a major cause of human suffering.

Pain can occur due to an injury of the nervous system (neuropathic pain) or from inflammation―in conditions like inflammatory bowel disease or arthritis. Cancer, and cancer treatments, can also produce a particular kind of pain.

Why don’t we have an objective way to measure pain, the way we can measure the body’s glucose level?

I wish we did. The answer is that it’s subjective. That said, there are ways you can assess pain in animals and humans; it’s just not as easy and precise. We know that the sensation of pain is interpreted by the brain and central nervous system. So it’s not only a matter of nerve damage and inflammation, but of our psychological reaction to that process.

Are there differences in the way men and women sense pain? And might we one day have “his and hers” painkillers?

It is well established that there are gender differences in the detection of pain, which are likely related to sex steroids and psychological factors. A deeper understanding of pain mechanisms may allow the development of drugs that are tailored for individuals – precision medicines for pain.

What about itching? What evolutionary purpose does that serve?

Itching signals you to scratch and remove noxious substances from the surface of the body. When it gets out of control, it cause extreme discomfort. And there are no current therapies for chronic itch.

Why is itching such a serious problem?

We’ve all experienced being stung by an insect; the itching is generally short lived and can be well treated with an antihistamine drug, targeting inflammatory cells in skin. We also associate itching with allergic reactions, dermatitis and skin disease.

Itching can be uncontrollable and almost unbearable when a person suffers from metabolic disease like chronic renal failure and or a liver condition. In cholestatic pruritus, bile secretion from the gallbladder is blocked and patients experience a profound itch that can lead to suicide. One of the treatments for this condition is a liver transplant. That’s how extreme the discomfort is. The entire body is overtaken by an extreme sensation that can’t be relieved by scratching or by any medication.

What other conditions are associated with itching?

During pregnancy; some women experience cholestatic itch that may be related to formation of progesterone metabolites.

Itching can also be a reaction to morphine. When opioids cause this kind of distress, our ability to use them is limited.

Itching can be caused, as well, by anti-malaria drugs like chloroquine. In some countries this side effect an limit the use of this important anti-malarial drug, with obvious problems for malaria control.

Can we create a new class of drugs that will eliminate this discomfort?

I think some of the receptors we’ve been studying to relieve pain will help us here as well—G protein receptors also transmit itch and regulate inflammation.

How do you hope your research will change the practice of medicine?

Pain is the main reason people go to physicians. Drugs that address both pain and itching will have a major impact on your patients’ quality of life.