State of the Union: Pancreatic Care in 2019 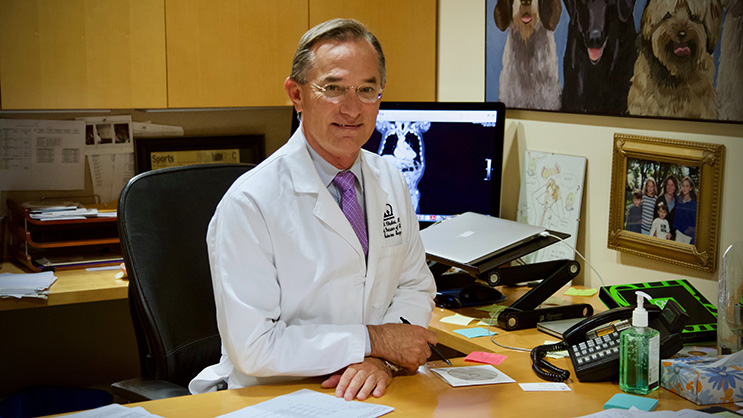 An interview with John Chabot, MD, Chief of the Division of GI/Endocrine Surgery, Executive Director of the Pancreas Center.

The two most exciting new developments in the treatment of pancreatic cancer are the potential to include immunotherapy as part of our treatment, and some recent observations that suggest that surgery might be available for more people than we thought—surgeries for people who are initially deemed inoperable.

As the preoperative chemotherapy is getting better we're recognizing that sometimes the radiology response lags behind the actual response of the cancer, and that sometimes we have to look beyond what we're seeing in the most recent CT scan.

What does that mean exactly, what are you looking for?

It means that sometimes the CT scan exaggerates the reality and makes us more worried about the cancer being inoperable than it truly is. And that's work that has come out of both our Center here and the Mayo Clinic.

Would you say that's the biggest change in the last 5 years?

I think fundamentally the biggest change is that the chemotherapy has improved, we’re identifying better and better drugs and drug combinations. And then that is a follow-on for reacting to improved chemotherapy.

Is that related to personalized testing and looking at genetic markers in particular individuals? Are you able to tailor chemotherapy in that way?

I think that’s the next phase.

As the use of surgery has shifted, have surgical approaches themselves evolved at all? The Whipple has always been the standard for care, is that still the case?

These are situations where we're doing Whipple plus. Where we’re adding the reconstruction of blood vessels to the standard types of operations, Whipple being one of them. I think what has changed is we're no longer accepting just a carte blanche to radiology that says “this is inoperable.”

And we did have to develop better tools. We're using other surrogates for the extent of cancer beyond just the radiology. Historically, if the cat scan said no, this is not operable, we didn't operate. Because of some other tools that we've used in the last five years, it turns out that in our experience about 80% of the time the radiology is incorrect. So we are using other criteria and getting more aggressive about surgery in people who have been deemed inoperable in the past.

What are the other criteria?

It's evolving. Number one, the reaction of the patient. How do they feel? Are they fit for a really big operation? And what's been the response of their tumor markers in their bloodstream?

Sometimes we use pet scans to ask the question: are we just looking at scar tissue or are we looking at actual true cancer? So, it's really a moving target. But what we have learned is that we do have to identify better criteria than standard radiology.

How does genetic testing factor into these criteria?

We are utilizing genetic testing not just of the tumor but of the patients more and more, both in determining what family risks exist, which we've done for a long time, but also it's beginning to influence the choice of treatments.

So, more and more we're sending out people's blood to understand their underlying genetics and use it in treatment. In any one individual, the BRCA gene is probably the best example, where it will definitely guide treatment, particularly in choosing [chemotherapy] drugs.

What is the role of radiation therapy at this point in pancreatic care?

We use it most in this same group of people—people who are initially determined to be inoperable, and we use it in conjunction with chemotherapy to try to make them “operable.” But if the patient has a great response to chemo alone, we wouldn’t need radiation.

What about targeted therapies?

There has been much less application in pancreatic cancer than we had hoped 10 years ago.

Lots of us are still working on it, but it has not come to fruition yet. We have seen a failure of response in multiple clinical trials attempting to identify agents that work.

Do you think that will change in the future, with some potential advancement in the identification process?

As we are better able to subcategorize pancreatic cancer on the genetic and molecular level, we may be able to return to some of those agents, in categories, in specific places.

The most interesting thing in that regard is work done by Ken Olive, PhD here at Columbia, who has worked with the department of systems biology to identify what are called master regulators in a whole bunch of human pancreatic cancers. And we really think of these as choke points in the metabolism of the cell, and really, he's identified four basic subtypes that we might be able to capitalize on.

What are you most optimistic about?

Immunotherapy—the possibilities are what excite me most at the moment. You know, I think our hopes are ahead of the actual value of immunotherapy today in pancreatic cancer. But there's so much work being done in it, and it has proven so useful in a number of other cancers that I think that's the reason to be hopeful for the near future. We know that the environment of a pancreatic cancer is profoundly immunosuppressed. That’s well-known. What we don't know is how to more consistently unlock that immunosuppression. That’s the next step.

What does this mean for someone with pancreatic cancer?

Today, at this moment, it doesn't mean a lot, and it probably only applies to about 2% of people with pancreatic cancer today. But for the patient who has stage 4 pancreatic cancer, for whom we've always had to say “listen chemotherapy is only going to prolong your life is not going to cure this.” I can now comfortably say, “We're going to prolong your life with chemotherapy because I believe there are new strategies coming down the line that are reasonably likely to come to fruition in your lifetime.”

And it's a very, very different message. It changes everything. Now, I am able to comfortably sit and tell a patient that without feeling like I’m falsely raising hopes.

Let’s jump over to pancreatitis. What changes have we seen in the management of pancreatitis?

I think one of the most important messages for us to deliver for those with both acute and chronic pancreatitis is that it's pretty commonly mismanaged. They both—acute and chronic—are often incredibly complicated disease processes that require both patience and aggressiveness. And that sounds like those two can't coexist, but they really have to.

And I think patients don't seek enough expertise when they have pancreatitis until they've had it for a very long time and they're just totally, totally washed out.

What would be your biggest piece of advice, to seek specialized treatment earlier?

What are the direct benefits of early intervention by an expert?

Some people need more aggressive treatment than they’re getting. Some people need interventions that I can generally do endoscopically. Some people actually need the doctor to stop intervening. And the doctor and the patient need to be very goal-oriented and need to communicate between the two of them what their goals are.

So, it takes a really deep understanding of the disease to work that closely with the patient, and it takes a real education of the patient about what are achievable expectations. And that's where I think having people with real expertise take care of patients with pancreatitis ends up making a big difference.

At Columbia, we have the full gamut of treatments available. We’re not limited in any direction, whether it's pain control or removing the entire pancreatitis or advanced endoscopic techniques. That availability gives us the freedom to really pick and choose what's best for that patient at that particular moment in their disease.

Within this personalized approach, do gene markers play a role in treatment in pancreatitis?

Yes, in a minority of patients who have inherited forms of pancreatitis. There are mutations that are within families that give rise to was called hereditary pancreatitis and it often starts in childhood and can be a devastating disease during childhood and adolescence. And also increases the risk of long-term of getting cancer. And at some point for the people who have the mutations that are likely to produce cancer, ultimately we often end up taking the entire pancreas out to protect them from cancer.

Click here to learn more about the pancreas, pancreatic disease, and treatments. To schedule an appointment at the Pancreas Center please call (212) 305-9467.

Don’t miss an update on news and content from Healthpoints, the blog from the Department of Surgery at Columbia.