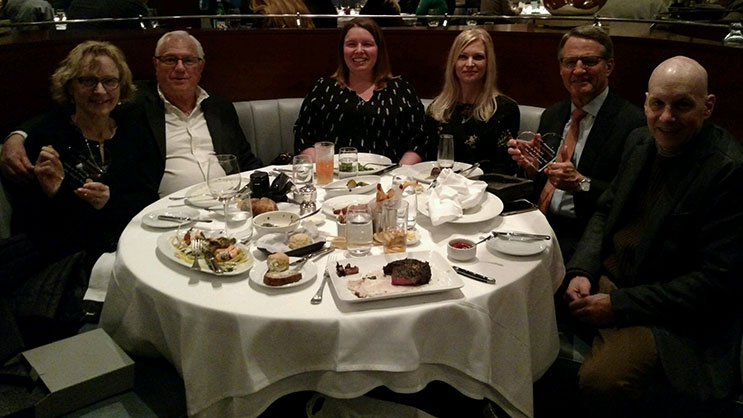 'In danger' was a constant state of being for Sean Kunzli, but it never scared him. Born with congenital heart disease, Sean had his first surgery in 1966 when he was only 4 years old. Doctors prepared his family that life would be a month to month pursuit, a hemorrhage could occur at any moment, and blood clots blocked his lungs intermittently throughout his life. The uncertainty never limited him, however. The way Sean saw it, he was left with one choice: to live fast.

Sean’s love for speed developed early, right alongside his struggling heart. “A lot of people would sit home and wait for the inevitable, where I never thought that way,” says Sean. “I just kept going and doing a lot of crazy stuff, motorcycle racing, car racing, a lot of stuff most people wouldn’t do.” The crazier, the better. Even drag racing grew dull after a while. “I chose to live life to the fullest. The downside to that is I had no fear. I figured I was going to die anyway so if I die in this spectacular crash even better. That’s just my personality,” recalls Sean.

He wouldn’t think that way forever; in 1990 Sean’s daughter was born, and she changed everything. “When Chelsea was born I got really serious about getting a transplant because I wanted to be there for her,” says Sean. “You have to have a reason to live, and she was my reason.” Sean chuckles with a smack of disbelief, “The decision has paid off a thousand times. It’s diabolical how much it’s paid off. She’s married now, has two sons. She’s amazing.”

That same year, Sean went on the transplant list, and he was a rare case—he needed a heart and both lungs transplanted. Sean spent two years on the list at Hartford before they did away with the heart-lung transplant program. Hartford sent him to Yale where he remained on their list for 6 months before they ended their heart-lung transplant program too. His doctors in Connecticut recommended he see Craig Smith, MD, at Columbia, and within 6 months a donor heart and lungs were heading his way.

In an epic coincidence, Sean was at the shore with his family preparing to hunker down when he got the call. Local news had issued urgent warnings; it was December 11, 1993, and a massive blizzard was on the horizon. “Trees were breaking off; the state was closing roads. It was the beginning of that crazy storm,” remembers Sean. Every minute mattered in more ways than one, but these were the kind of odds Sean liked most.

He booked it home to Connecticut in his Dad’s Porsche—mostly to get the prized possession out of the snow and into a garage. It’s an admitted bad car choice for inclement weather. “So I get on the highway, and it’s almost all ice—the whole highway. I nearly cleared a whole guardrail out but knowing how to drive, I saved it. I’m saying to myself ‘I don’t need this today!’” The weather was so dangerous that even Sean was rattled slightly. “I get home unscathed, and I’m like ‘that was close, that was close!’”

It had been almost two hours since he got the call, and by the time an ambulance picked Sean up, it was snowing in sheets. They made it to Hartford-Brainard Airport, but their plane, which was coming from Boston, lost its GPS in the storm and had to turn around. Sean’s transplant team scrambled to find another plane, and somehow swiftly secured a leer jet already headed that way.

“The pilot’s looking at me, and I’m looking at him, and it’s snowing hard. It’s freezing rain.” Excitement, terror, a looming countdown—Sean was prepared for this kind of rush. “It was a brutal ride,” exclaims Sean. “The pilot turns to us and goes ‘it’s going to be a rough landing; the runway is covered in ice.’ We almost slid off the runway—I wasn’t worried at all!”

Feet finally on the ground, but the third leg of their journey wasn’t any smoother. It was about 3.5 hours since the initial call, and Sean landed right across the George Washington Bridge in New Jersey. “They send an ambulance over, and there’s an accident on the bridge, the ambulance can’t make it through,” Sean remembers with a tinge of disbelief. By this point, Sean started worrying that even if they made it to the hospital, it would be too late to have the transplant. Before that thought was able to manifest fear, his transplant team found a car: a limo already in New Jersey was still moving and on the way.

“So, we get in the limo, go over the bridge, and we get stuck. We’re stopped,” says Sean. “I call the hospital, and I’m really scared I’m not going to make it. I tell them I’d be more than happy to walk the rest of the way! And they’re like no, no, no, you’re going to make it, just stay in the car,” Sean says bursting with laughter. Finally, they pulled up to the hospital 5 harrowing hours after he first hopped in the Porsche to beat the snow. The saga was such a whirlwind it wasn’t until Sean put on his hospital gown that reality crept into view.

Only moments before surgery, Sean decided to call his daughter Chelsea. At 3, he knew there was no way to explain what has about to happen to Daddy but told himself if she doesn’t answer he would make it through the surgery to relay the message—this was all for her. The call went straight to voicemail. He said “I love you,” and resigned himself to the hands of his team. Many hours later, the heart and double lung transplant was a success, and Sean awoke to his family eager in waiting.

Even with the transplant, Sean was told he would be lucky to live a year, maybe two. “Then 2 turned to 3, then 3 went to 5, then to 10 years, and the rest is history. I’m still going!” says Sean triumphantly. Sean was out of the hospital within two weeks and took immense pleasure in the shock that befuddled his friends as he walked into a New Year’s Eve party at 10 pm only 19 days after transplant. “People almost fainted, they couldn’t believe it. Happy new year, guys!” It was a happy new year, indeed.

“As far as I know, I’m the third longest living heart double transplant in the world right now,” says Sean. “I feel better than ever. My labs are as good as they were in my 5th year out, my pulmonary [function] is as good, my blood pressure is normal, and my lung capacity is the same as it was 5 years out,” says Sean, equal parts dismay and pride in his voice. “I’ve met with lots and lots of people at this point, sharing my transplant story. And it’s so important to talk to others who have gone through it,” Sean’s voice takes a somber tone.

His most important piece of advice is about follow-through long term, even when it gets hard or tedious. “I’ve seen a lot of people die after transplant because they didn’t follow through with their medicines or their appointments. They just thought it was okay, they felt so good they didn’t need medicine anymore” he says. Immunosuppressant pills keep the body from rejecting the transplant organs; they’re necessary every day to maintain normal function. “The medicine is the most important part; you take it for life.”

Sean has remained close with his transplant team. He’s celebrated milestones with Dr. Smith at year 15, year 20 and now year 25. “I plan to come down to the city to celebrate in year 30 too!” His zeal for life is much like his young love of danger: steadfast and infectious. “Life is fantastic. I’m seeing my daughter grow up. I never thought I’d see her grow past 3, see her first day of school, middle school, high school,” recounts Sean. “It’s just unbelievable how great it was. And now I’m a grandfather, and it’s just so bizarre for me.”

“My daughter, her sons, mean the world to me, and I’m here because of her,” Sean says, audibly beaming. “Life goes on, and it’s really good.”

Read more about the Congenital Heart Center at Columbia.